One day, Blue Blue, my blue eye cat, was caught playing with “something” in his paws and mouth.

When you get close to see it, it was a bright green caterpillar, may be drop from the leaves in one of the pot in our balcony garden.

My wife thus place teh caterpillar into a plastic container.  Of course, we place some leaves and water in it.

Few days later, the green caterpillar ate quite some leaves before turning itself into a pupa.

Another few days later… which is today.

Jay suddenly shouted and say “Mommy, mommy, the butterfly has come out…."

And there you go, the butterfly that we saved from Blue Blue’s paw. 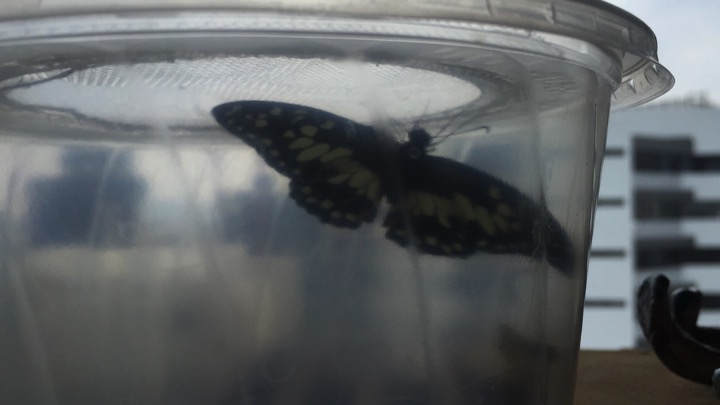 As it is just came out from the pupa, the butterfly is learning how to flap its wings.

It is actually quite a nice butterfly.  Very pretty. 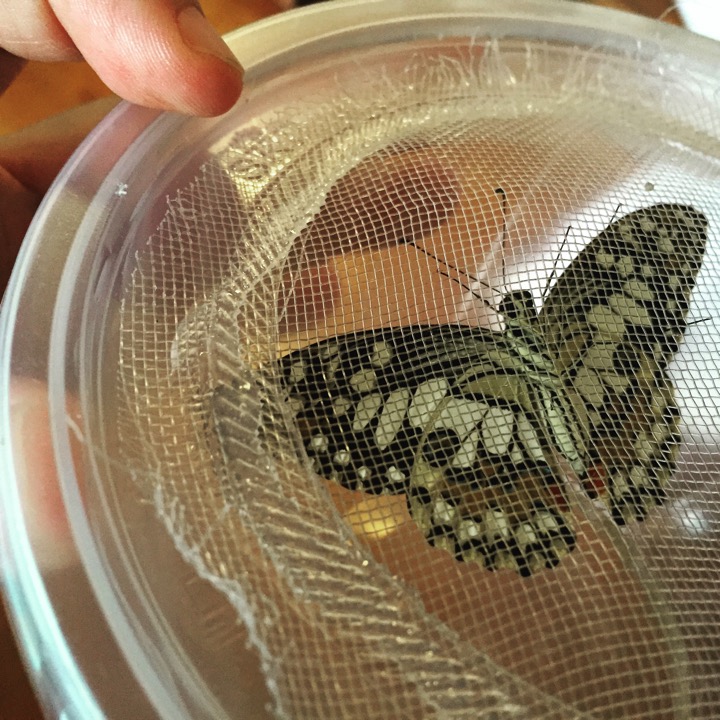 She still flapping the wings.  And she is ready to fly.

So that the butterfly can find a new home in our herbs garden downstairs.

We let Kay Kay do it.  So, Kay Kay will let the butterfly go, and let her has her freedom. 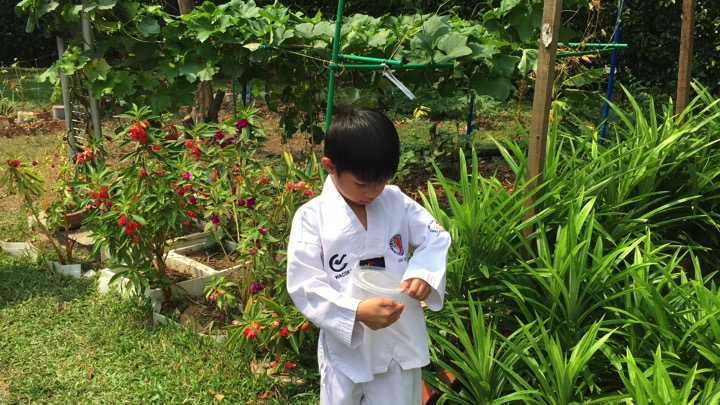 She was a bit scare in the beginning, but as soon as she flapped a few times of her wings, she flew off.

Of course, I did not waste this opportunity for Jay Jay to learn his Chinese Composition.

So, I quickly draw out my iPad and ask him and the brother to think about the Butterfly event, and write a small passage of it.

So, the journey from home to Millenia Walk is only 15-20 minutes. 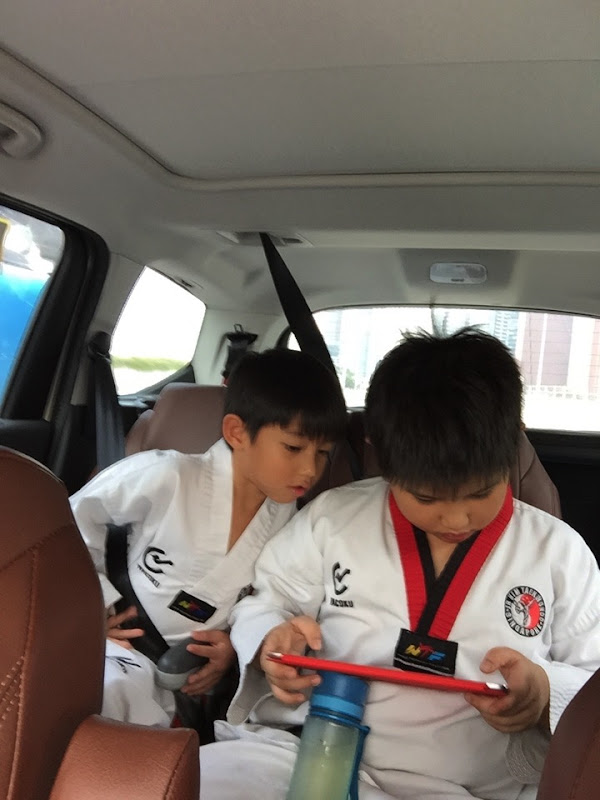 As you can see, this is what he comes up with.  Not too bad.

I recon that this will give him may be 5/10.  So, thru out the day, we discuss about the whole event.

Instead of “my cat”, I asked him to think, where is the cat?  Where he (the cat) finds the caterpillar?

Instead of “let it go”, how he fly away?

What about the conclusion, any thoughts he wanted to write down? 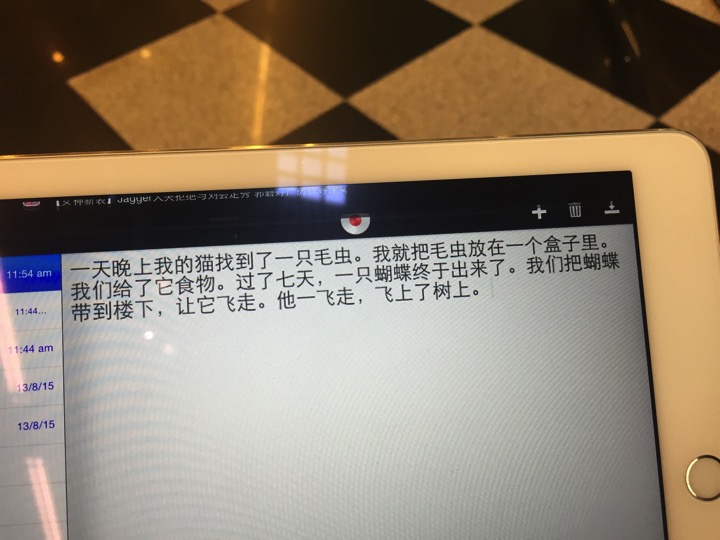 During lunch time, we talked about it.

After he took his Taekwondo grading, we talked about it. 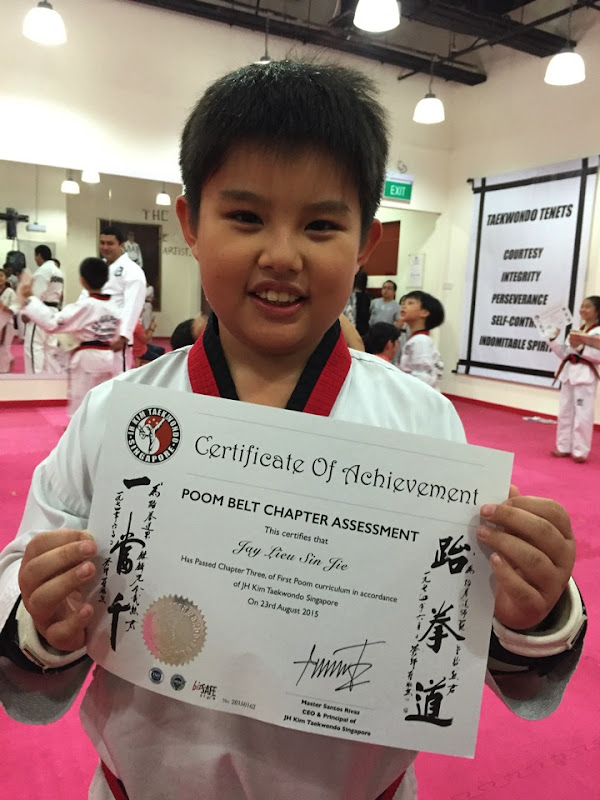 While going from Millenia Walk to the Turf City, before the drawing class, we have another 20 minutes or so, for him to work on it. 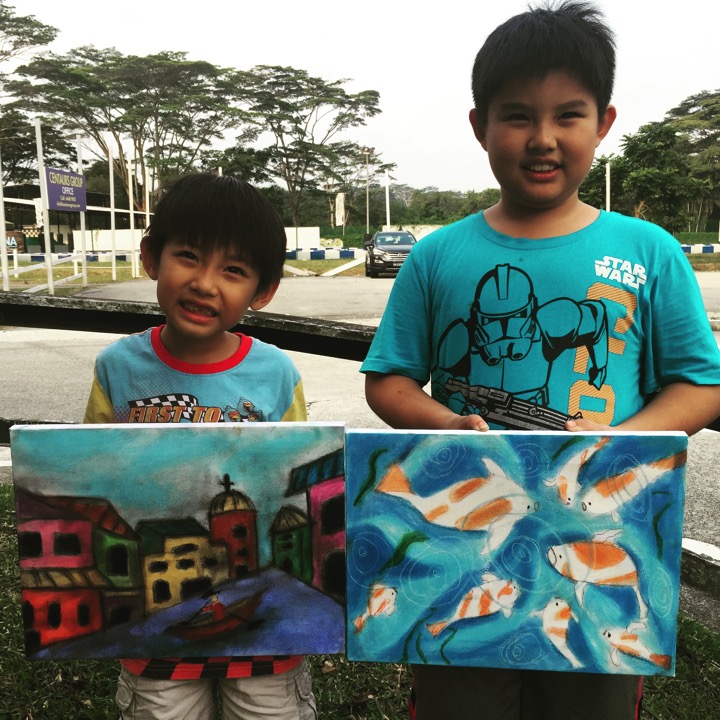 And this is the revised version.

He knows learned the important thing of “describing”.

Describe our cat is naughty.

Describe where our cat found the caterpillar.

Describe why the cat is naughty?  See the caterpillar, wanted to bite it.

Describe the how he tell mommy about it.

Describe how the butterfly is scare and don’t want to fly out.

Tell who is the one brought the butterfly downstairs.

Describe how he touch the butterfly and make it fly away.

Describe what was his feeling?  Happy.

Describe why?  Because he let the butterfly regain his freedom. 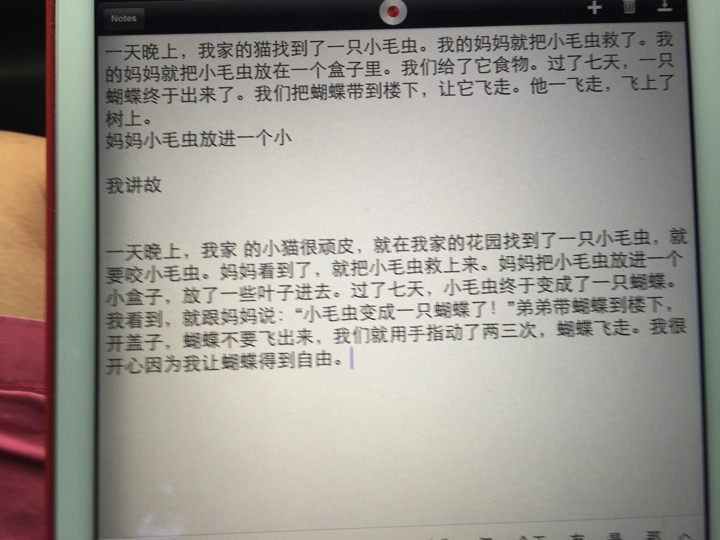 This is a very short event.  But writing it down involves constant thinking and asking questions about the 6 “Ws”.

And after we have done with the Chinese composition, I will let him speak out from his mind in English.  Again, asking him to “describe”.

He won’t learn it straight away.

But I am sure, thru the training, and exercising, he is more confident and grabs the concepts of writing.

Writing is about describing.

Writing is about asking the 6 “Ws”.

Why I love to read the Hardy Boys Junior Files for them every night.

That is because these Hardy Boys books focus in asking the 6 Ws to solve crime.

And I show him a way how to use technology, the Dragon Dictation to quickly jot down the chinese sentence thru speaking.

First you learn how to pronounce things correctly.  Second, you quickly write down the Chinese senates.  For words you don’t know, as long as you can read, you can use the Han Yu Pin Yin to find the words.  In P3 Chinese composition, they are allow to use the dictionary.  Be it hard copy or electronic.

Hopefully, thru these methods, I can help my boy to improve his writing in both Chinese and English.  Yeah, Dragon Dictation can change the languages to English or Mandarin.

And lastly, you notice that the brother Kay Kay is sitting besides.  Do it in front of the siblings so that he or she can be inspired and wanting to follow his brother.  :)

加油吧！My sons, if you guys can make it for your Chinese, don’t forget about the efforts your daddy put in to teach you guys.  :)