File Photos or Stock Photos That is Reused and Reused Again

This is a very interesting topic.

So, Discovery Channel says these "found footages" are shot from a fishing boat that got hit by something huge, i.e. a Megalodon.  But Wil Wheaton (Star Trek - The Next Generations) pointed out that the Discovery Channel's Megalodon was completely fake.

That is a very big shock to viewers like us.  It really has breached the trust between a loyal viewer Vs. a documentary TV shows.  So, can we trust these photos or footage from now on?

That brings us to our main funny topic today.  :)

Take a look at this news reported by the Straits Times.

Here, they are reporting about "Football fans" con used over telco's rebate offers. 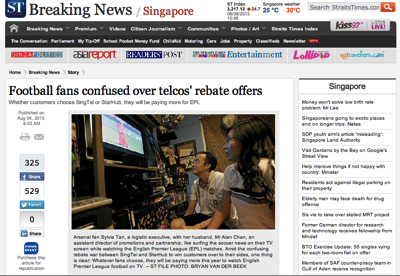 So, here they make use of a so called "File Photo" that is in their storage for some times.

The news is published on Aug 4.  This photo also looks fine to me.  Arsenal fan, Ms Tan and her husband watching the EPL together. 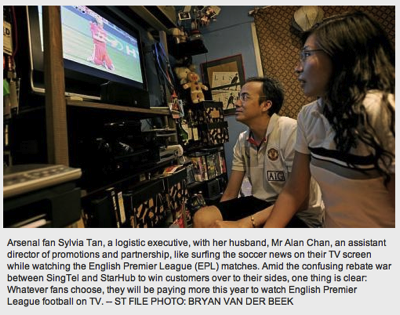 And Yeap… Nothing wrong here.  Obviously the husband and wife in the photos gave permissions to ST to use the photos and keep it in the FILE Photo storage.

So, nothing wrong so far.  Except for a big joke.

The lady in the photo - Ms. Tan actually wrote into the ST page, and as them to remove the photos.  I quoted here "Alan and I have split up TWO YEARS AGO, we have since moved on an stopped watching football".

This is so funny.  But let's think for a while.

Why ST go and pull out a photo that is older than 2 years ago?

You know some people like me and my son will always look at the photos and we will guess what is happening in the world today.  So, if we see this photos which is more than 2 years old, we still mistakenly believe that it is a present event, present photos.  HaHaHaHaHa

So, I am guessing all the magazine act like this!  hahaha

Email ThisBlogThis!Share to TwitterShare to FacebookShare to Pinterest
Labels: Debates