[Note:  This is a very detailed blog about my son's first ever completed 5 holes executive course at JCC]

[Note:  You can see the score Jay Jay did a the end of the blog.  Scroll down.]

Today & yesterday was PSLE oral test in school.  So, there is no school for P1-P5.  So, Jay Jay actually got 2 days off. 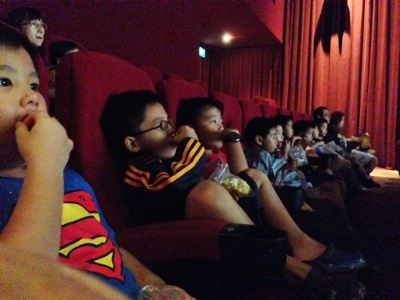 When you have a day-off like this, and it is not a public holiday, or it is not a weekend, it will be "cheap" to bring your kid to the JCC Executive Golf (5 holes) course.

Oh dear, look at the sky, lots of dark clouds.  But luckily there is no thunder sound. 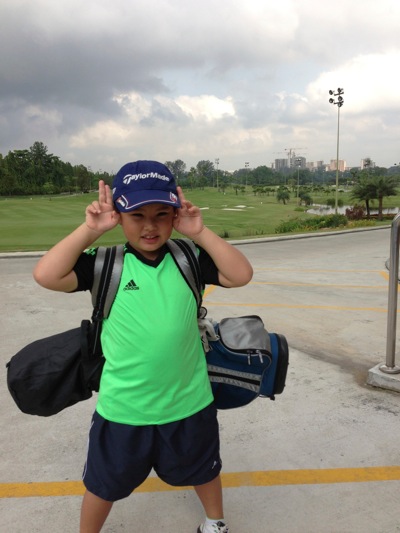 Off we go to the first tee.  The last time we were here, Jay Jay only managed to finish 3 holes due to thunder rains.  Hope today can finish the 5 holes. 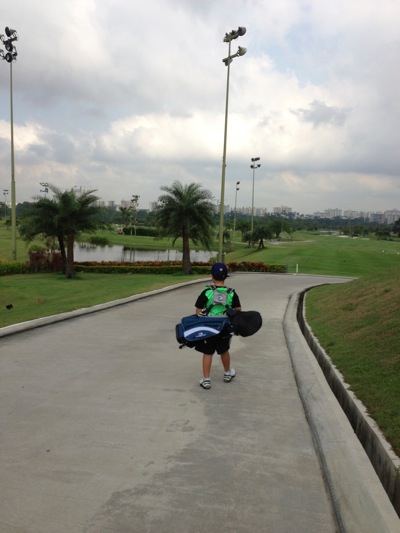 Now, when I see this photo.  I know what we all forgot to do.  Bring the sand container.  hahahaha  shhhhhh…. 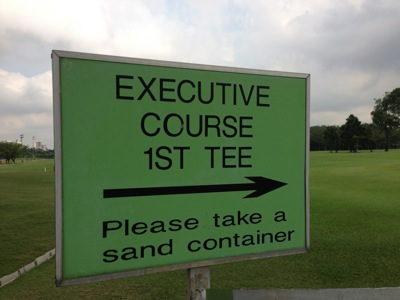 Finally, I can document down Jay Jay first ever completion of an executive course.  There are 39 videos below.  I try to make this a good memory for Jay Jay.  He was very happy yesterday after the golf game.  Just to make it easy, I will mark [GOOD] for those shot I think he did best.  :) 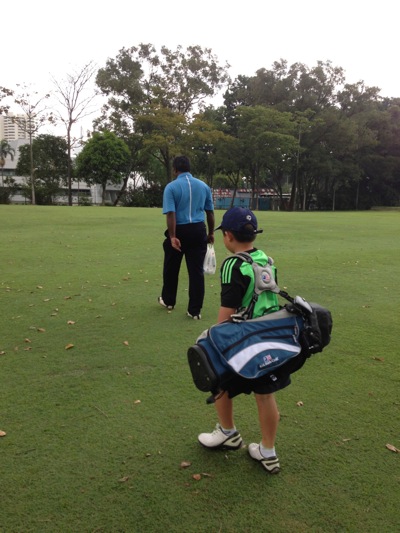 Here he tee-off the first hole.  From the sound of the tee shot, you know he tops it.  But it is a nice try.  So, we have to slowly guide him to swing naturally.

What do you know.  I only bring my 7 iron, pitching wedge, 58degree sand wedge, fairway hybrid and my putter in the sunday bag.  What do you know, my first shot is on the green.  It is only 120m shot from the red tee box.  Ya, I am playing the same tee box with Jay Jay. 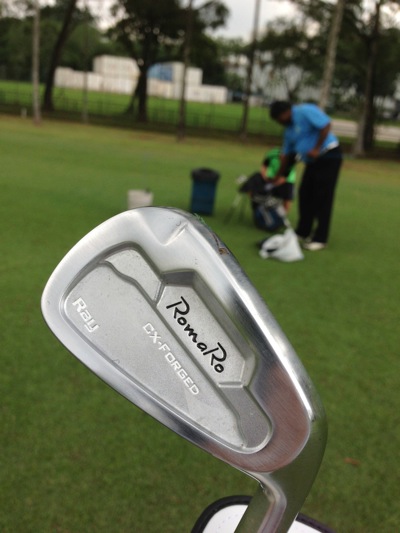 Let's get Jay Jay to practise a few swing first. 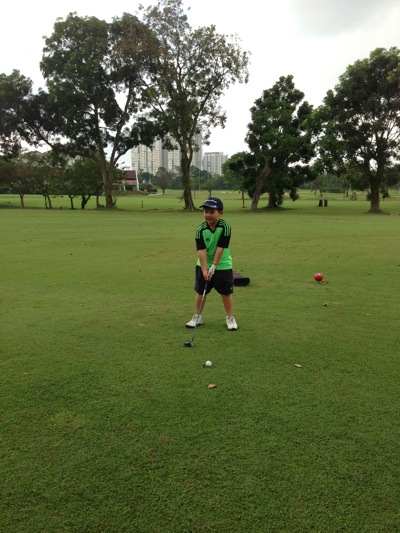 Somehow his take up the swing quite fast. 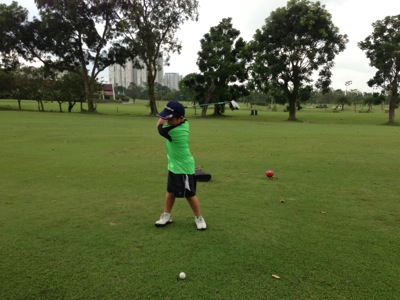 The finishing is OK. 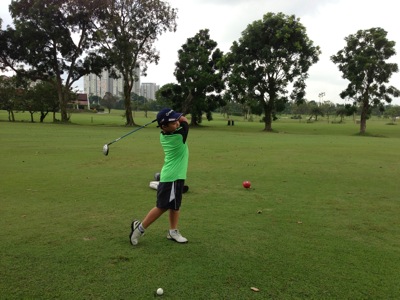 [GOOD]  We get him to swing the second time, and he delivered.

The key of the game is to try to produce the same posture, same swing while the golf ball on the ground and the hole remains unchanged. 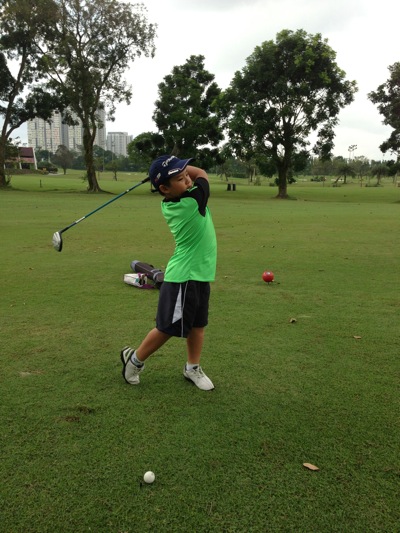 He is happy about his tee-shot.  Carry about 60m. 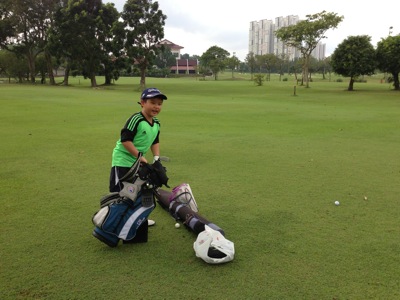 Let's do the second shot. 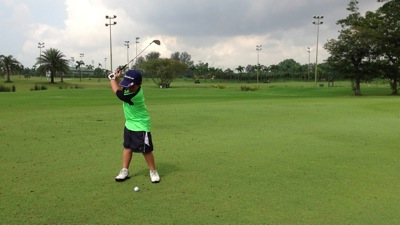 [GOOD] Teacher has to come in to teach him how to aim, and make sure the club face stay close.  And he delivered again!

[GOOD]  This is the third shot.  Not that bad, it went to the right of the flag, slightly outside the edge of the green.

[GOOD] We get him to shoot another ball from the same location to try to see if he can hit with lesser swing.  He did OK in this, again, it is to the right of the flag.  So, aiming got a bit of problem here.

Here, we let him practise chipping.  But seems like he does not know how.  So, later we will give him more chipping exercise.

[GOOD] Here, he attempt his first putt.  He miss.  I think the concept of putting is new to him.  All the time, he did his putting training inside the air corn room with flat putting mat. Now, when you are in the real green, you need to learn how to see the slope and figure out where to hit.  hahaha

When you are at the executive course, and if there are no people behind, usually you can hit a few more balls.

Jay gets to practice a lot of different shot. 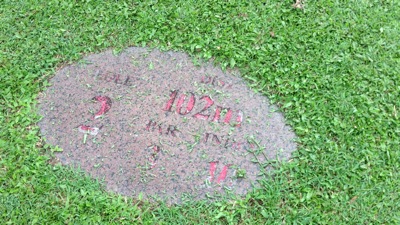 [GOOD]  Good shot!  Here he learned a few things.  1) club cannot touch the ball.  It will be penalty shot.  2) tell him that right hand side is water hazard.  Kids at this age has no concept of water hazard and if they started right, they will know how to hit the ball straight.  HaHa… so far I have yet seen a slice from him.  haha 3) aiming, which is important.

[GOOD]  Teacher actually ask him to use an 8 iron instead of 6.  He wanted to see if Jay Jay can carry the shot over slightly 40m or not.  So, he has a great shot but not enough distance for a 7 years old to carry over the bunker.  haha

[GOOD]  So, we let him hit a shot just before the bunker.  He has never know what is a bunker yet.  haha So, he hit this close to my tee-shot.

His first attempt to hit a bunker shot.  He is definitely confuse on what we meant by cannot touch the sand and hit 2 inch behind the sand.  haha

Never carry the sands.  But manage to hit a clean shot.  Carry quite far.

[GOOD]  He practise at least 4-5 chipping shots here.  And this is one of the best.  Very nice one too.  We consider he is 4 on again. 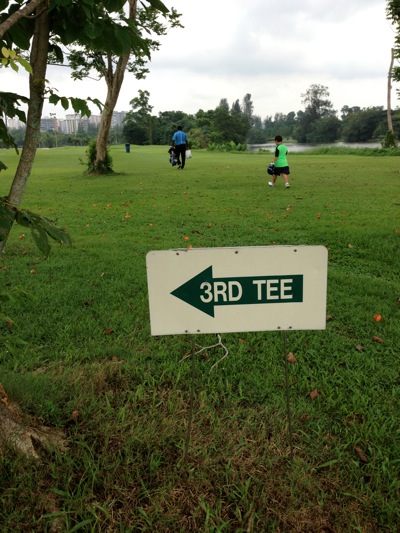 The wind is blowing very hard.  I hit two shots this hole, and both shoot to the left of pin.  Interesting, the wind never carry it to the right.

[GOOD] Here is Jay Jay hole #3 tee-off.  Again, the sound of the driver is good.

He hit the 2nd shot before the bunker.  So, now, have to hit it carry over the bunker again.  He tops it.

So, the concept to the kid is very simple.  Golf is a game in such a way that you have to hit the golf ball into the hole.  The good news is, the golf ball is always at the same place.  It is how you swing, and how you produce the same swing that is matter.  I think he only understand half of what I said.  hahaha

He hit his third shot far away from the pin.  So, now we have to teach him how to hit a long putt.

He hits at least 10 putts here to try to get the concept.  We let him play 10 balls here.

But the good news is, the more he practice, the more he got used to the putting concept.  Now, because he has not learn the concept of physics, so, it is kind of hard to teach a 7 years old, why and how the ball will roll in a sloppy green.

Jay proceed on with 3 putts to close this hole. 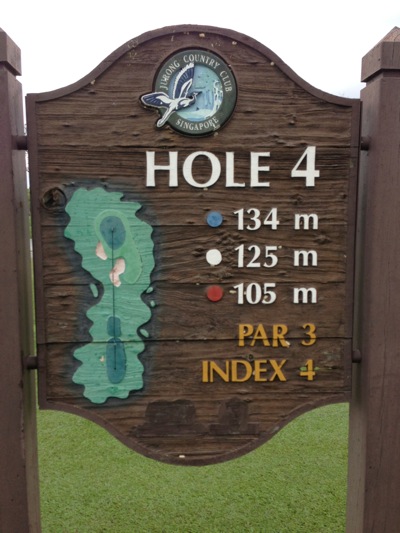 [GOOD]  He nailed his driver shot.  This time, his shot aiming is to the left and he hits the tree.  I hit 2-3 balls this time.  So, in front of my son, I showed him even daddy can make bad shots sometimes.  But as long as you always think about the shot and try to improve it, then, it is ok.

[GOOD]  This is his second shot., and he is on the green!  Bravo Jay Jay.  This is the first time, he can have a chance to beat his daddy.

OK.  Lets drink some lemon water to boost up energy and luck.  haha 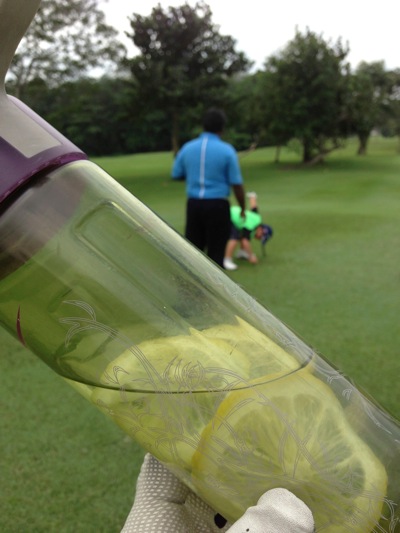 He was so happy about the shot before.  So, we need to see if he can produce it again or not.  This shot is about too hard hitting.

Here comes the chipping lessons.  See if he grasp the idea or not.  The more he learned, the more better.

[GOOD]  Very nice chip.  He is practising.  This is not his 3rd shot.  Both practise is nice.

Aiming is always a problem.  Also, the addressing is way off too.  So, a bit too hard.  Oh well, this is the first time he really feel what is chipping about.  He always learn and practice in the golf range.

So far, he really did quite well. 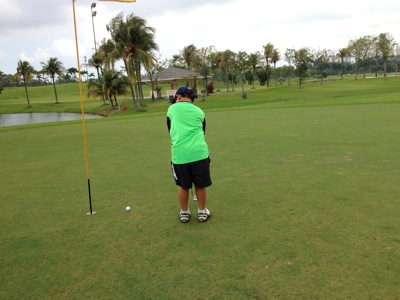 Look at teacher Veandhan hitting my hybrid.  He is trying out a fade shot. 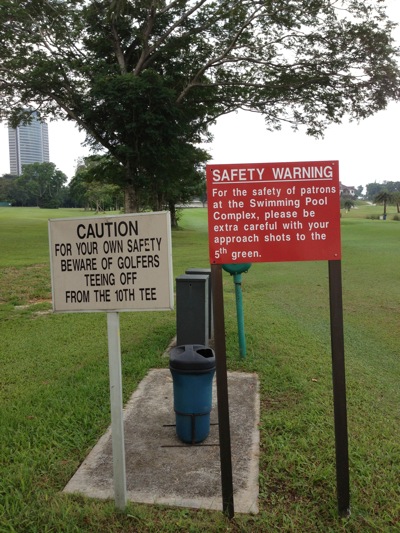 Wow. it is the only par 4 in the executive course. 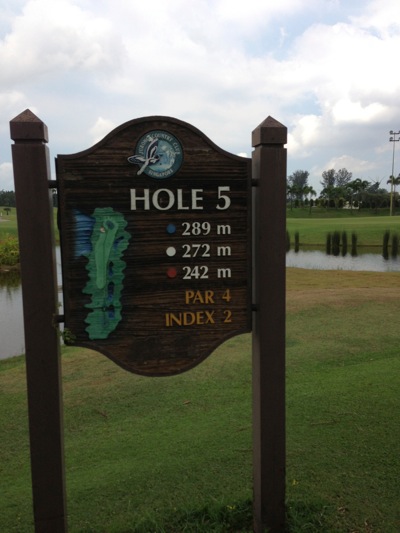 Again, right side is water hazard, does not seems to bother him.  haha

[GOOD] Again a very good shot.  Nice tee off.  Now, only now and today I know his "Driver" is actually a fairway wood.  I did not buy a driver for him.  No wonder, I was wondering why his driver cannot carry over 80m or 100m.  Teacher Veandhan than show to me that the USkid golf set does not come with a real Driver.  hahaha

[GOOD] Because is a long par 4.  So, Teacher Veandhan teach him how to use the same fairway wood to hit the ball on the fairway.  He struggles a bit before he shoot a nice one.

Before this shot, he hit one that is really far and good.  But I was busy with my shot then.  So did not movie down that shot.  But this shot is OK too.

Its really a long par 4.  So, we made him hit another shot.  And consider him as three on.

[GOOD] So, we make him do more putting at the last hole.

Let's do more putting.  Before we go for lunch.

So today, Jay has a few accomplishment. 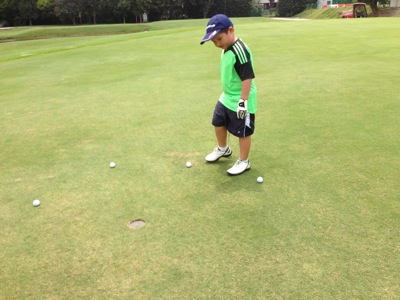 3.  He learned that putting is not easy.  Got slope.  not a straight line putt.

4.  He learned that chipping is nice if you really swing nicely.

5.  He learned that aiming is difficult.  You have to aim from behind of the ball not sideway.

6.  He learned that the club cannot touch the ball.

And he enjoyed the game so much.

So, I will try to book him another game during his September school holiday.

Sep 20 is yet another PSLE free holiday for P1-P5.  So, I will also book another game on that day.

Somehow he likes to play golf.  So, I must let him play as often as possible so that he can understand the game.

Next year, I will let him join SICC team, and train under SICC coach.  Then, he can be expose to all these inter-club or club tournament and so on.