Today, my wife has no teleconference.  So, I booked two tickets to watch "That Girl In Pinafore". 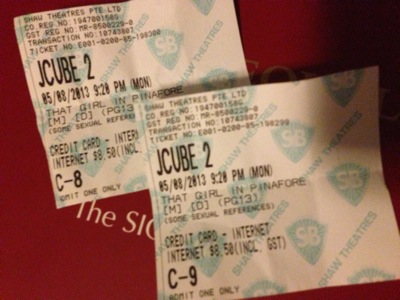 Last week, I just attended our school 万人宴, many friends I have not met for 25 years.

The high school that I have spent my teenager years. 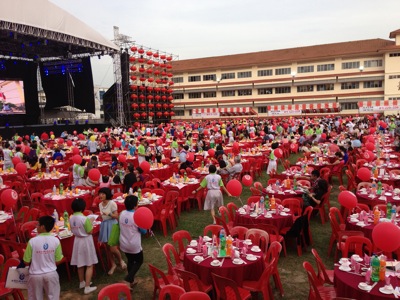 The classmates I have many days study together, copy homework together. 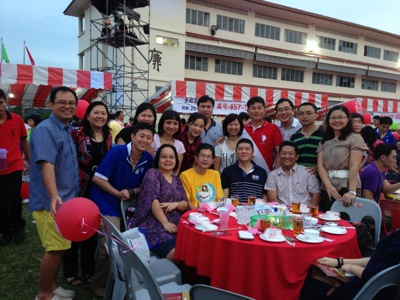 So, you can tell that for people like us, we love to watch these kind of movie that can bring back memories.

WARNING:  Spoiler Alert!  Don't read this blog entry if you intend to watch the show but have not do so.  :)

NOTE:  If you miss all those 新谣 songs, just scroll down to the bottom got lots of you tubes.

Disclaimer:  I spent my high school year 1983-1988 in Foon Yew High School, during those years, we see a lot of students bring guitars to school.  After school, we sang the Taiwanese Folk Songs and later, we sang the Singaporean 新谣.  Those are the years that you would sing songs for your boy friends and girl friends.  And thanks to 新谣, it created so many great memories.  Up until today, my iPod, iPhone, iPad, and iMac have all the 新谣 albums and songs.  No joke, the impact of 新谣 is really big in our lives.  So, the expectation of the show is set very high.  And of course, if the director did not do a good job, Hmmm… you know, the audience who was born to enjoy 新谣 era will have lots of things to say.  Sorry la.  HaHaHaHa. So, all these comments are purely my own opinions as an audience who been thru that 新谣 era. 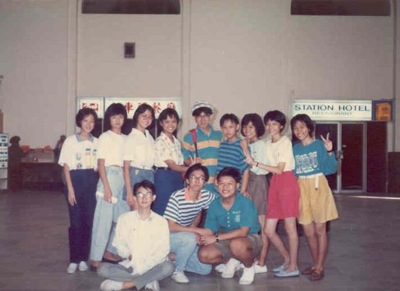 Let's dig out some and post it here.  These group of friends are friends from 随缘.  A tea place where people gather around sing song, chit chat, etc during the high school years.  So, from time to time, we have organise trips to Pulau PaPan and camping there. 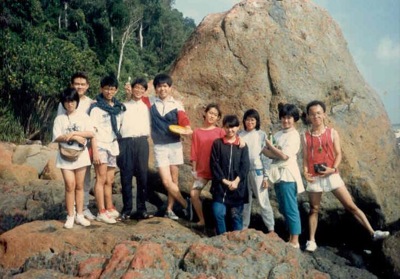 Of course beach is one of the favourite destination of camping.  Sit around the camp fire, and you sin song. 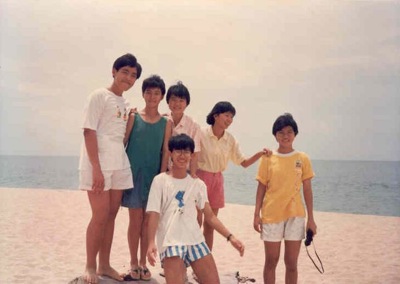 You got to love those years where you always hang out together. 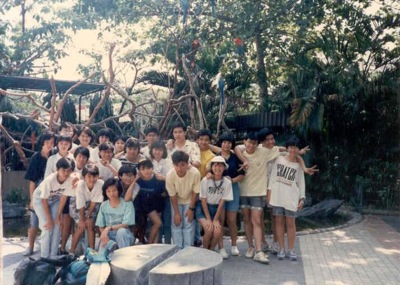 You also spent most of the time with your classmates acting, playing, and having lots of fun together. 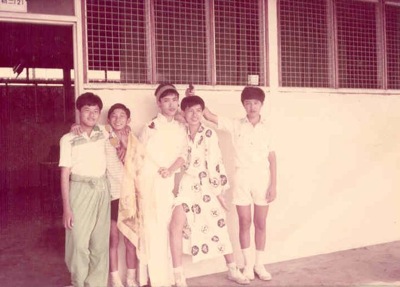 Those are the year, where you always take photo with style. 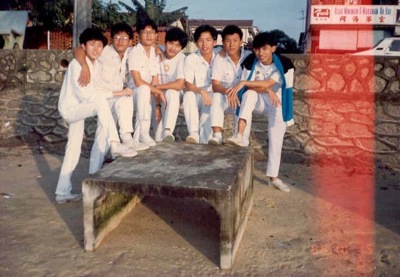 Of course, joining the drama club also brings back lost of happy memories. 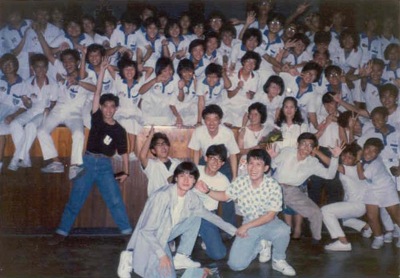 Let's talk about the movie.

OK.  First of all, let's figure out what is the meaning of "Pinafore".  (Those who know me, knew that my English is Super-烂!)

I google and found that… Pinafore means the school uniform for girls?  I think. 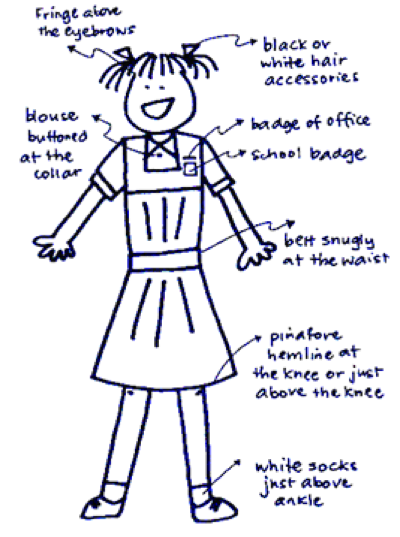 Definitely school uniform.  Or some sort of skirts. 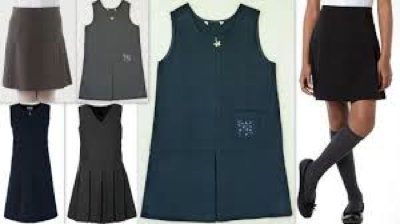 At least, if you compare to 那些年我们一起追的女孩 & “You Are the Apple of My Eye", the english name of the movie and the Chinese name meaning is similar.  So, I have no idea why they need to come up with such an English name.  They can actually do better. 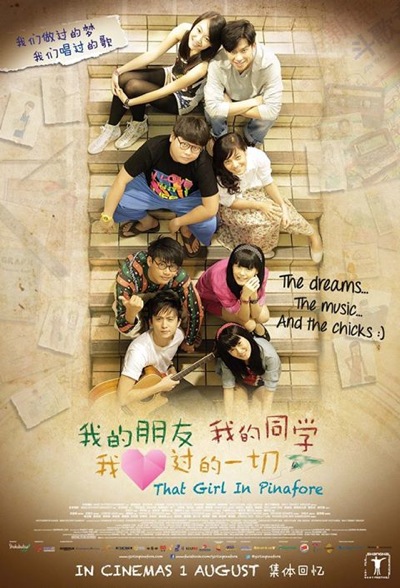 The story should be about "The dreams… The music… And the chicks."

I felt that the movie some how is not completed.  They took part in the Talent Show.  But lose to that bad boy.  And then what?  He did not become a Singer?  And he became a English teacher?  Hmmmmmmmm…. That is very strange ending.  Hmmmm….. They love to sing, should have a singer career mah.

The beginning part is actually quite entertaining.  I quite like it.  I can see some strong shadow of the Taiwanese hit "You Are the Apple of My Eye" humour elements in there.

The Sparrow Street song is quite a nice and entertaining song.  I like it.

But having the song during the exam?  Hmmm… Where is the relevant there?

Yeap!  Definitely no relevant at all.  I think it is much better to put in 历史考试前夕.  And this will definitely bring out the childhood memories.  Take note that the Sparrow Street Song actually contains some dialects, that is why it is not in all the Radio station, and thus, not so popular.  hahaha

Also, some how, I think the movie making is not done properly.  The song and the lips some how got some different in pace.  You can easily tell by listening to the song, sing it in your mind and watch their lips and you know it is obvious.  :)  Hmmmmmmm…..

So, the girls sang "黎明的心"

I guess that is all right, because they need to compare to those US rock singer.  So, they have to add some rocks into the songs.

But… 新谣 is not about rock and roll.  It is about the lyrics is so meaningful to our lives, our student years.  So, adding the rock and roll components, Hmmmm… may not be so suitable lor.

So, when the lead actor got beaten up, wearing the Pinafore, and they sang 星空下.  The rock version of it.  I think that is OK.  And for a moment, you can see the hands is tapping, the leg is tapping.  :)

No complaint with 走过年少 too.  I think this song was played when the girl died.  Can't remember liao.

The romantic songs.   OK.  The girl heart got problem.  The girl likes the boy.  The boy really likes the girl.  You can tell.  So, there are many love songs in 新谣.  So, which song is suitable?  I also don't know.

Ok.  We know she has a weak heart.

Why the English teacher got married.  With who?  没交代！

The fat boy married with the Malay girl.  That's ok.

So, I am confuse here.

So, why the daughter invite him to come down to the pub to see her singing.  Is she famous?

18 years later.  Hmmmmm….  isn't it too young.  She was adopted by a foster parents named "Anderson", should not be Chinese.  So, where the girl learn Chinese from?  What happen to her Grandma?  Does her grandma even know her daughter has a daughter?

When the girl died, at the wake, the bad boy stand beside the mom.  The mommy slap the good boy.  Hey, why?  Does this boy friend cause her daughter to die?  没交代！

Hey, when the girl crying, why got some one walking on Orchard road using Smart phone?  HaHaHa.  Should remove that scene.

Also, go to airport, are you sure you can bring bicycle inside?  And there is no finger biometrics  machine at that time la.

The Jazz version of 细水长流 … Hmmmmm… not so nice at all.  The original one better la. And I think if it sing by a male singer is more suitable. Got that 气派！

Having said so much.

In general, the idea is pretty much there.  Trying to choose the songs and make it a musical comedy.

The comedy element is there, but it does not continue to the end.  So a bit wasted.

The story has a lot of unfinished, unexplained scenario.

When I see a good movie that has impact, my tears will usually drop la.

Some of the songs was modified to have Roc and Roll style and Jazz style.  I thing changing those songs like that lost the original taste of the songs.

I think they (the directors) should make another one, so to make it better.

Now, having said so much, let's find some  新谣 songs and enjoy it on Youtube!

There are three great 新谣 singers.  The songs are nice.

This is the song every one sang together.

This songs is really nice.  I love this song.  Talks about how a kid should grow up.  One step at a time.  I love the chorus part.

I love this song too.  Listen to the lyrics.  I like it.

After hear all these great songs, you always spent time writing some songs for people during those years.

When you study too much, it is really too much too much.

A song that has a lot of meaning.  A song that makes you remember your mom.

I think this is the song that caught every one ears.  Almost every where you go, you can hear people singing this song that that time with another girl.  hahaha

How can you forgot this song?  It is a 经典!

This song is after 1988 I think.  I don't believe I heard this song before.  But when I bought the CD, I had this song, and I like it.  It is funny song.  Talk about the three daughters this Mr. Zhang have.

A song all of us sing for so many time during those years.

This is also a favourite song.  All the kids sit together, when they grow up, what will they become?  The song tell you that.

Oh.  Look at this three boys.  When they are young.  They dance fancy.

When they older, they sing maturely.  haha

OK.  Have you chase girl before?  If yes, this is one of the possible things that happen to you.  right?

If you have not watch it, go watch.  It is OK show.  Not that fantastic.  but for the sake of listening to those nice songs and bring back a little of the memories.  Now showing. 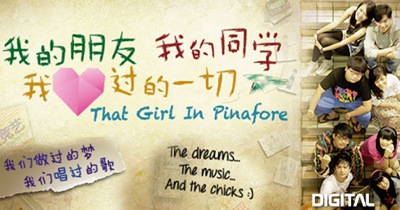