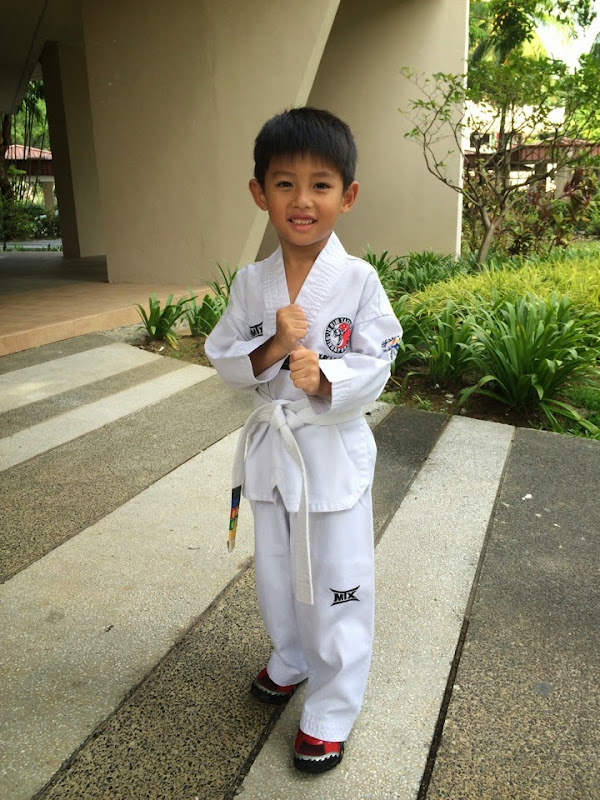 Taekwondo is a life skill that we as the parents require our kids to learn well.

It is for self-defenses and learning of respect.

Jay Jay learned Taekwondo when he is in Q3 of K2 years.

But Kay Kay, we put him much earlier.  When he is in N2, we have enrolled him into the Tots class.

HaHa… Look at all the happy face stickers he has… you know how long he has stayed in the Tots class. 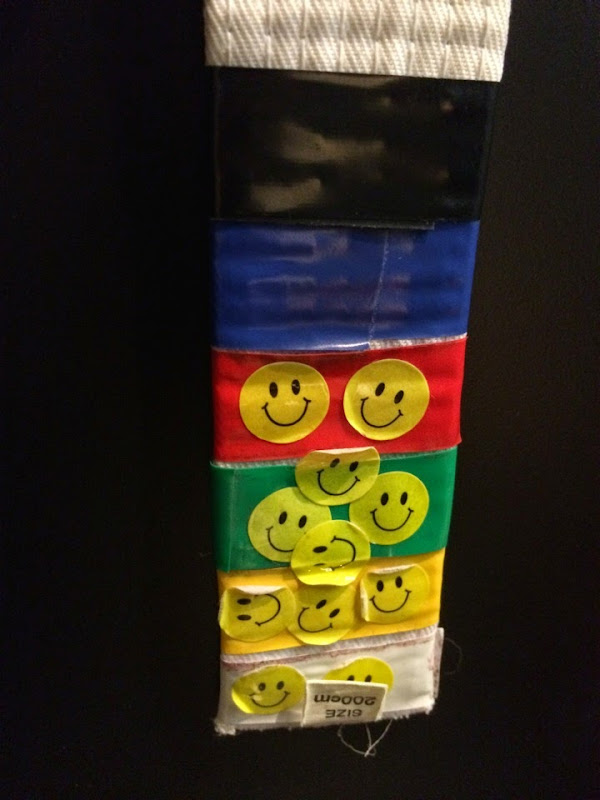 But I think it was a bit of mistake, as he perceived Taekwondo as a playful class or similar to a gym class.

That is why, he was in there for a whole year before we force him to go into the normal class together with his brother.

I think it is a bit young for K1 to receive instruction to learn Taekwondo too.

So, when he is going for the grading, we were a bit worry, because all the punch and kick were no strength at all. 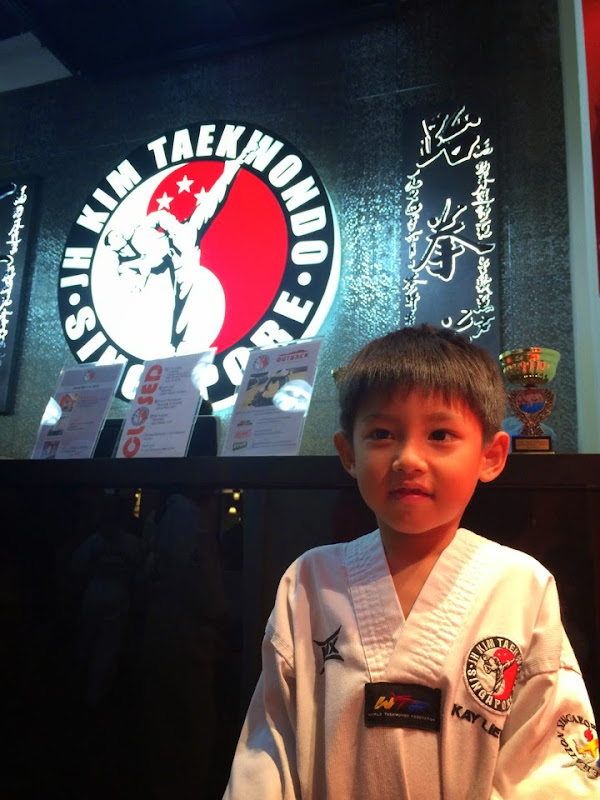 Last week was the grading.

And this week… is change belt week.  All the students is waiting anxiously for their new belt. 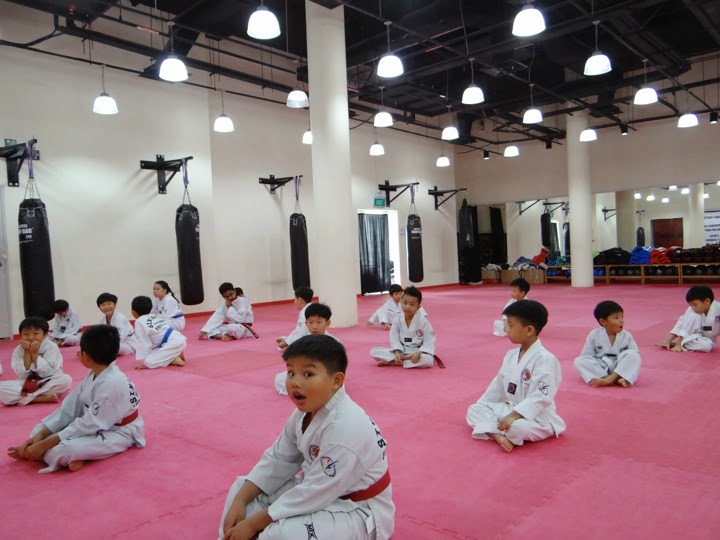 He is so happy today watching so many people change their belt.

And he starts to understand it is an important thing to pass the grading.

He starts to understand why his daddy force him to practise the white belt pattern 3 times every day, for 3 whole weeks before the actual grading day. 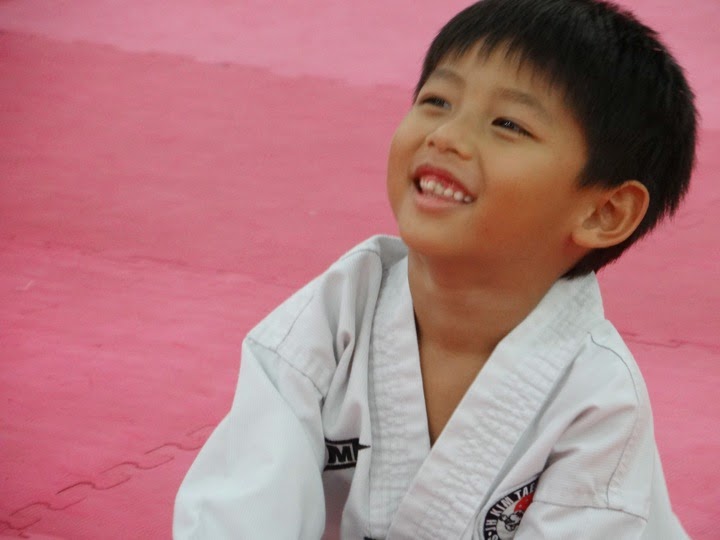 This is the first time for both boys receiving the new belt.

What we hope Kay Kay will learn is to learn how to respect Taekwondo.  How to defend himself.  Also, he will learn the warning from me, never mis-use the self-defence art on wrong purpose. 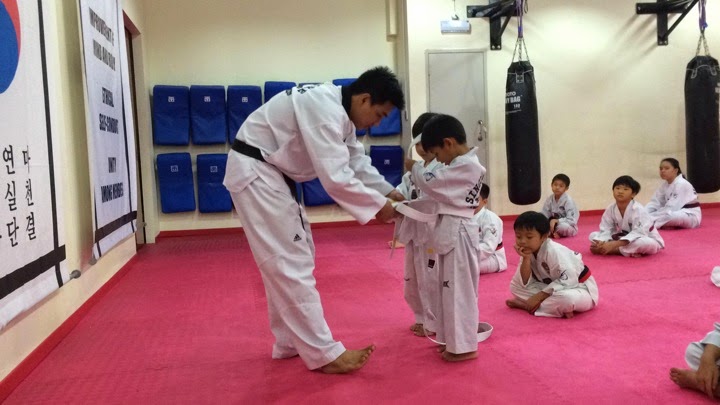 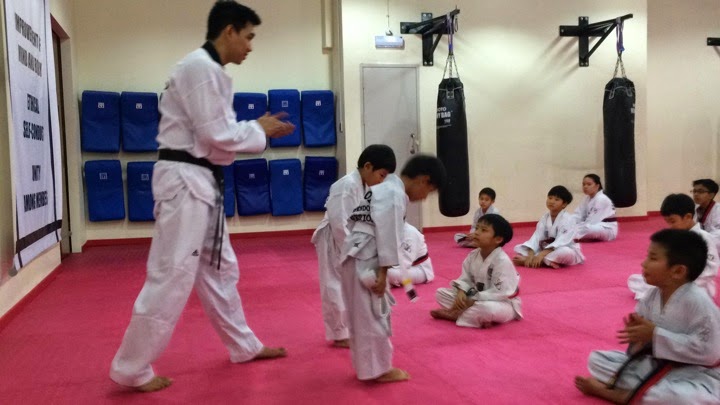 As for Jay Jay, he also take the grading on the same day as Kay Kay. 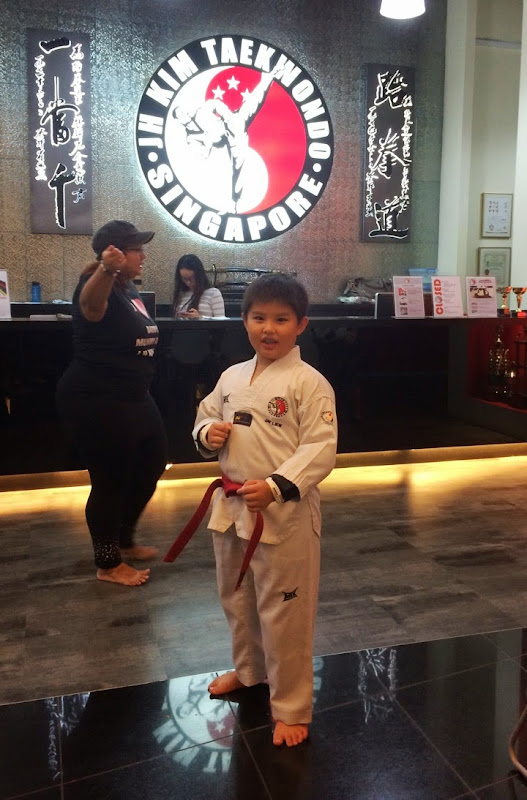 He has to know all 4 patterns well. 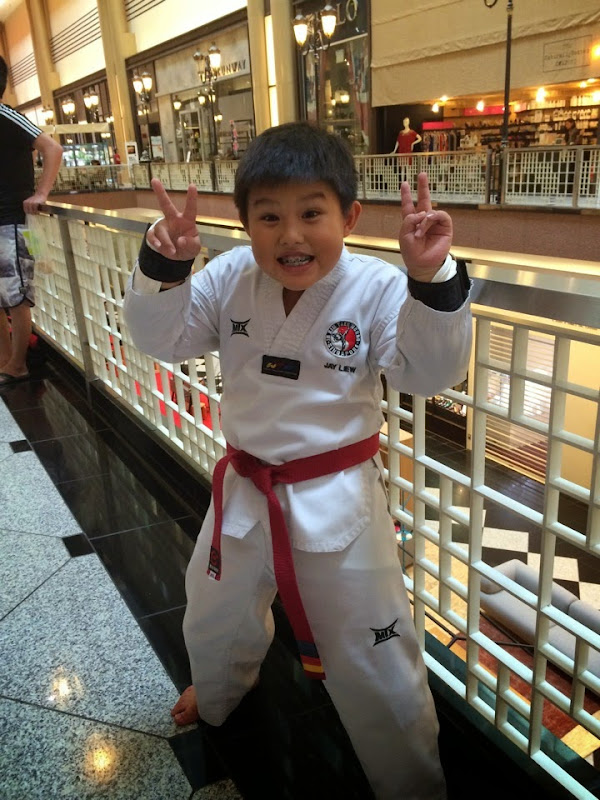 We were a bit worry 3 weeks before the grading.  We have not much time left as we took 3 weeks off during the last June holidays.  That is why he missed out a lot of classes.

Not to worry, we actually bring him to Taekwondo classes 3 times a week for the last three weeks so that he can be fluent in all the 4 patterns.  He has actually taken 2 more extra lessons to do so. 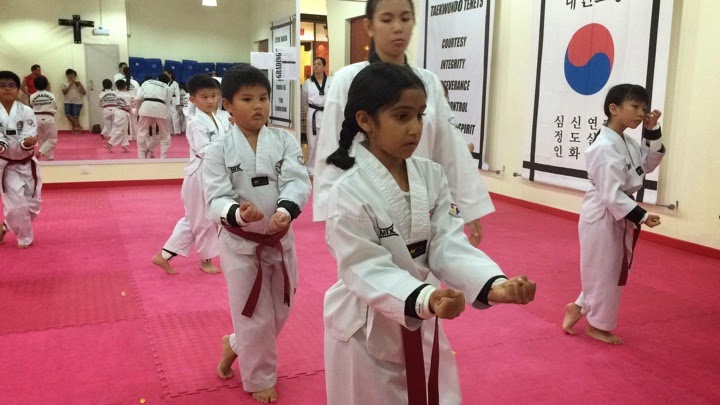 On that day when the actual grading takes place.  Jay was full of confident. 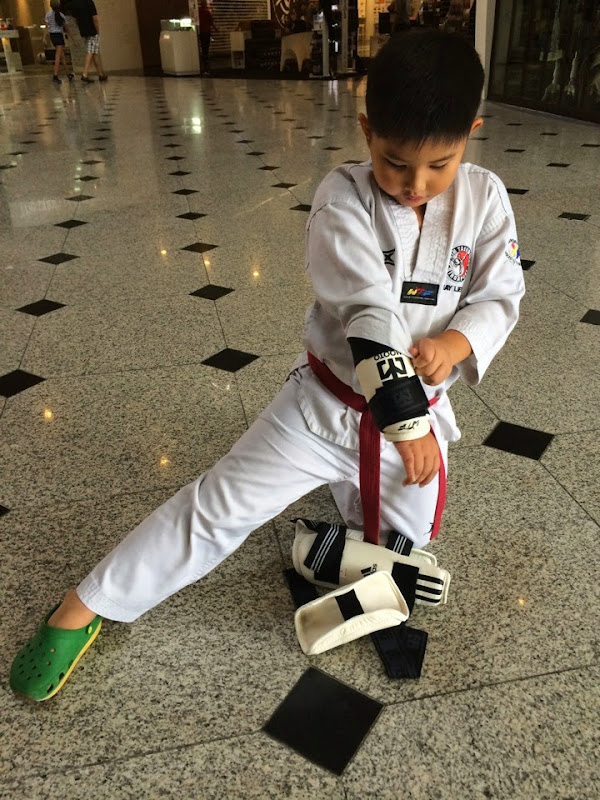 We arrived 50 minutes earlier.  So, he said, let’s cut hair. 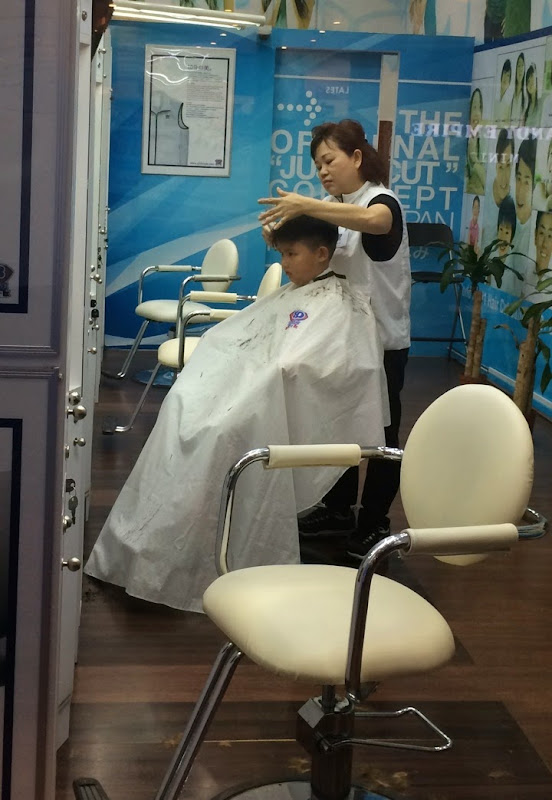 That day, the red belt grading took about close to 1 hour to complete.

From outside, all the anxious parents were talking about it.

There are a couple of students re-do the patterns.

Last term, there are a lot of student actually failed the red-tip test as well as red belt test.

The rumours says that the STF examiner were commenting that J.H. Kim’s students pattern was not so accurate. 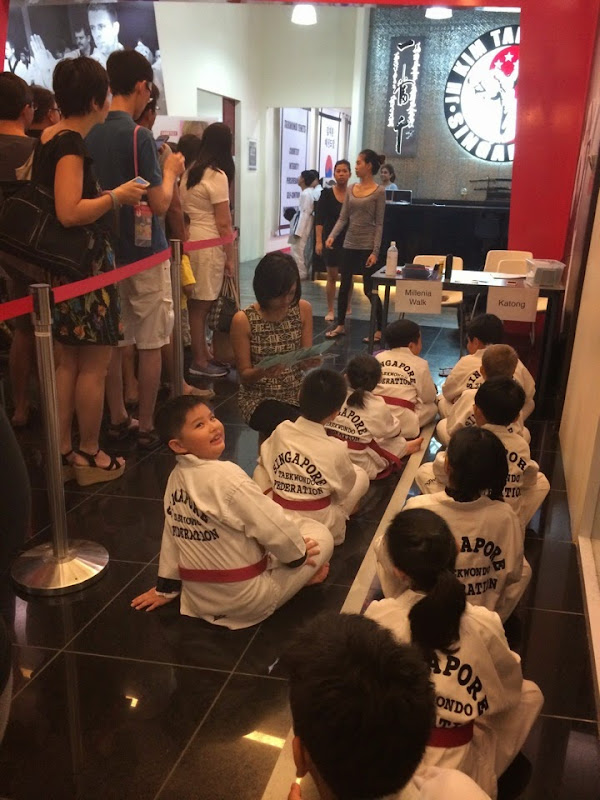 But as soon as he came out from the room, and he gave me this pose, I knew he nailed it. 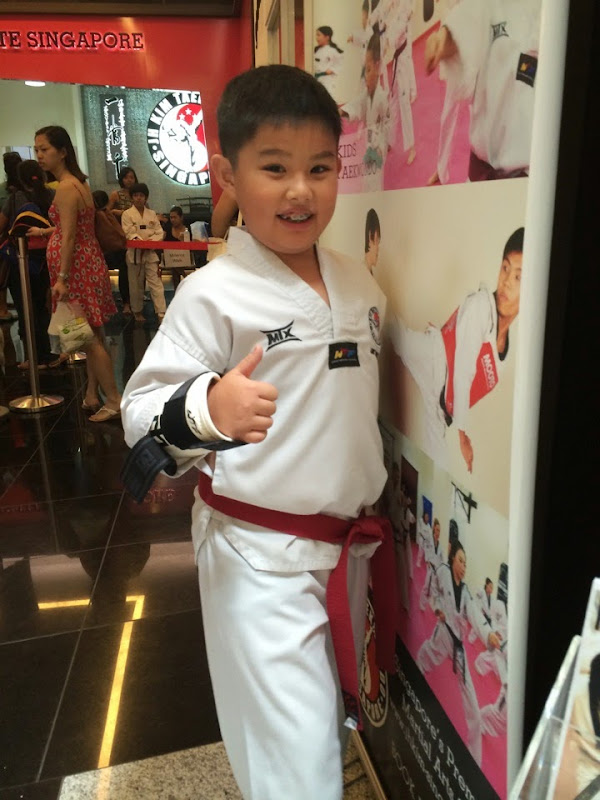 And today, we are very proud to see him received his black tip belt. 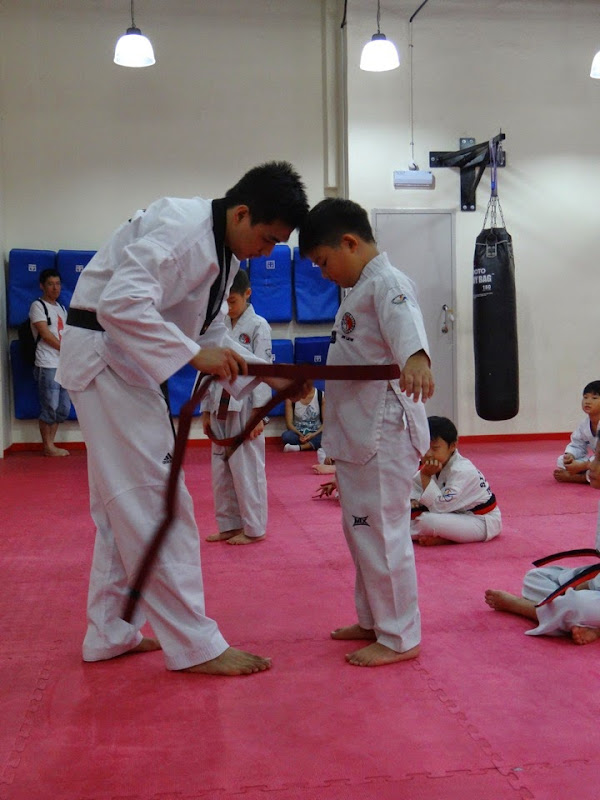 So, November hopefully he can get his poombelt, and then, next year black belt. 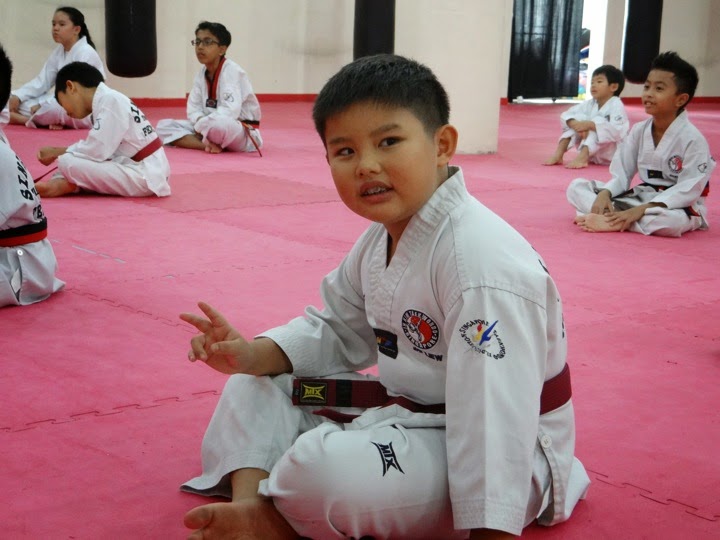 Photographed and videoed by daddy & mommy. 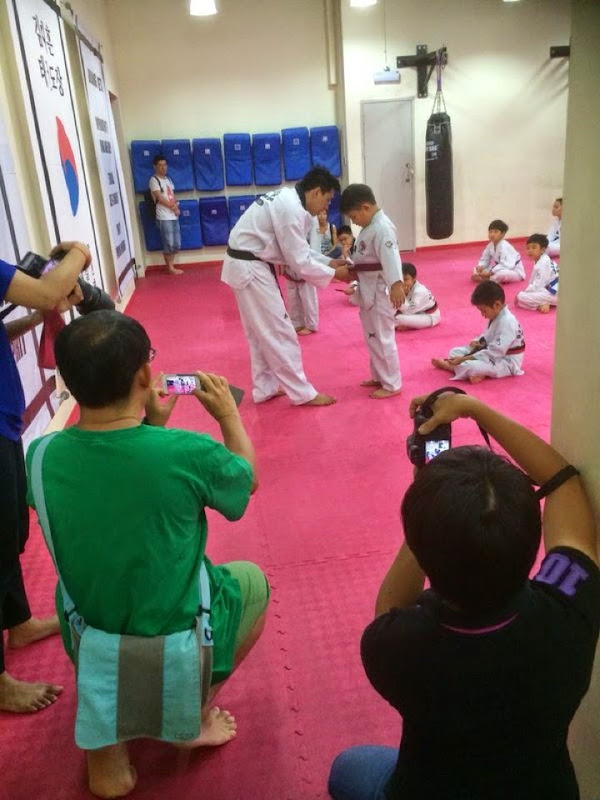