[SPOILER ALERT] I guarantee you there are many interesting new knowledge you can learn from the tour guide.  So, if you want to try it yourself, please skip this blog.  If you think you will never have a tour guide to guide you in Flower Dome, enjoy the new information you are about to receive.

We just did the Annual Pass for the Garden by the Bay yesterday.  During the national weekend, there are promotion, and since there are too many people applying for their card during that weekend, we were advised to pay for the Annual Pass first at the promotional price, i.e. S$90 for the family, and then, they issued us a voucher so that we can come and do the card anytime after the crowded national day weekend. 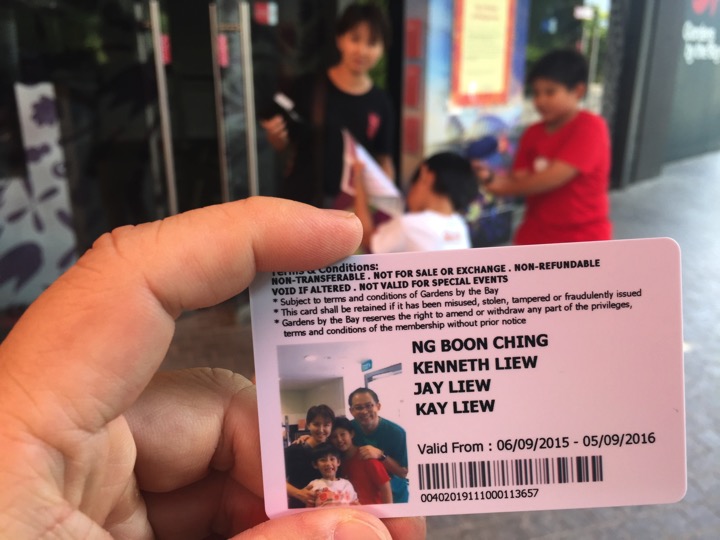 The boys love the “weather” inside the dome.

We have visited the Flower Dome many times. 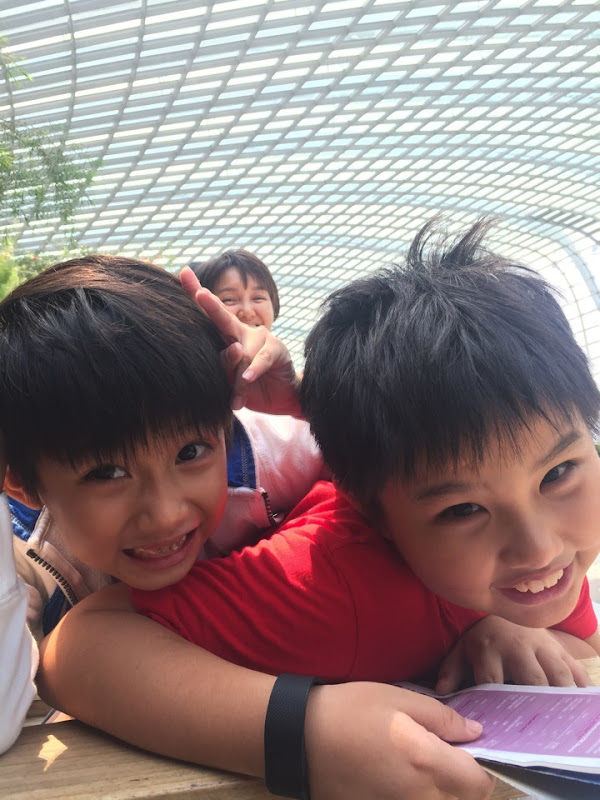 But this is the first time we joined the free tour.  We are the only Singaporean family joining the tour.

The rest came from all over the world.

The tour is free for this SG50 exhibits special.

I am not sure when is the time they conduct, but we joined the group at 3pm, and the tour last for almost 1 hour. 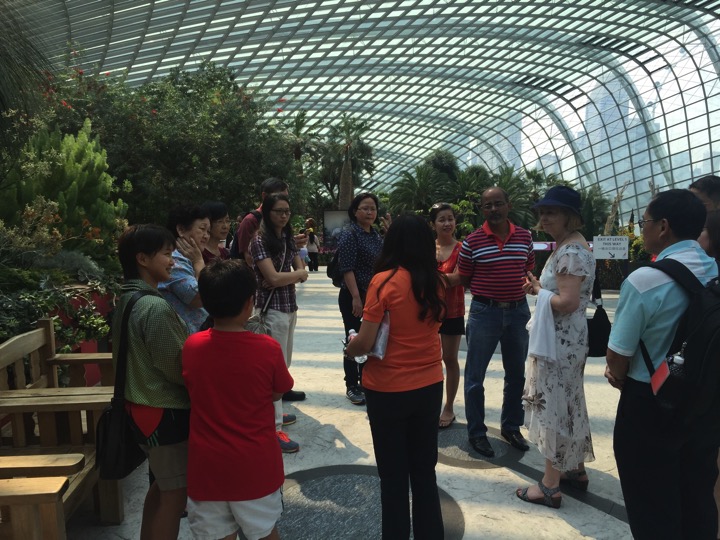 The tour guide is Ms. Magdalene, and she does give just a lot of surprise.

Here are some of the highlights.

1.  The first stop is Sang Nila Utama. For me, I only know that some one came to this island, saw a lion and name the island Singapura which is a Lion city.  The tour guide tells us that the historian will object to this story, because, Lion originated from Africa.  And during that time, around the year1299, there can’t be lion in Asia as the British, the Spain and the Portugal has not even begin their sea voyage.  So, what did Sang Nila Utama see that day?  A hairy tiger?

The kids listen to the story with their jaw drops.  Singapore is a lion city, but there is no lion during that time. 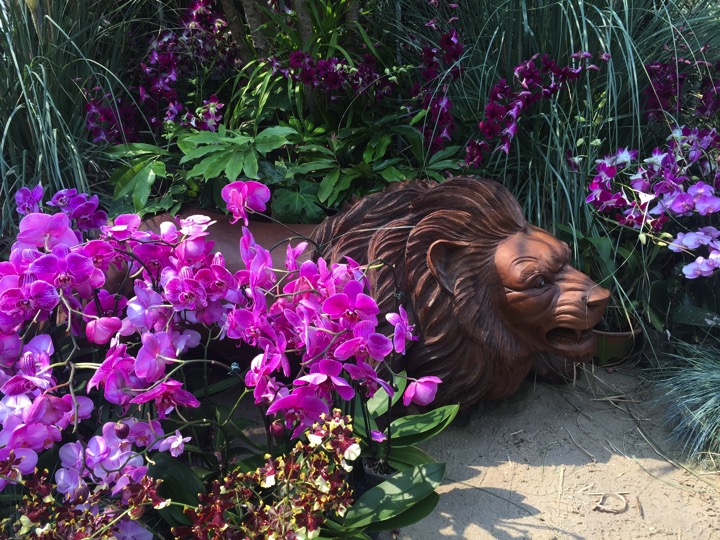 2.  This plant originated from Australia.  Looks like a grass.  But also looks like a tree.  So, is this a tree or grass?

It is a grass.  Not a tree.  Somehow when they grow, all the long grass will be kept inside and under to form like a branch.

Interesting.  OK, in order to pollenate the grass, they have to use strong fan at night to blow the grass so to hope that the pollenate process works.  So far no result yet. 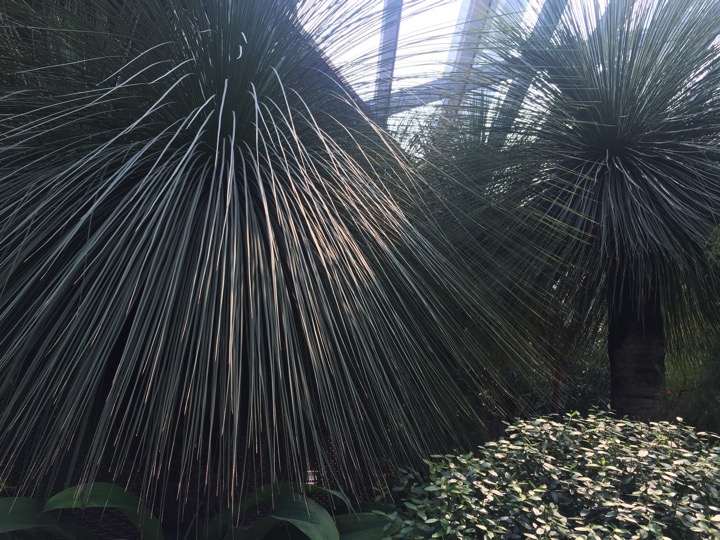 3.  This is the Kangaroo Spores tree.  It originated from Australia too.  Notice that the flower is very nice.  And it only blossom during spring time.

And Flower Dome has successfully “fool” the plant to think that every day is “spring” time, and thus, it is blossom for whole year round.  Cool! 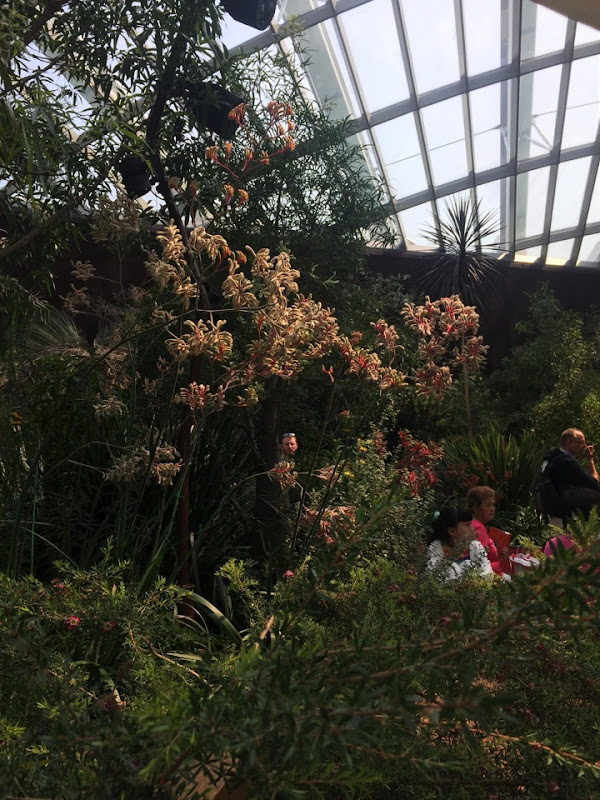 4.  Our forefather who build the nation in the early years.  OK, the next question is, we all know the “Kuli” came from China and India.  Which labour force is more cheaper?  The Chinese or the Indians?

The answer is Chinese.  That is because, during those days, the Chinese are poor, and they want to get out of China, but China impose strict penalty to catch people who stole away to come to this part of the world.  The Indian was under British government, so, they are more expensive.  Usually Indians are the “supervisor” employed by the British, and Chinese are the real cheap “Kuli”.

Some real history for the kids to learn. 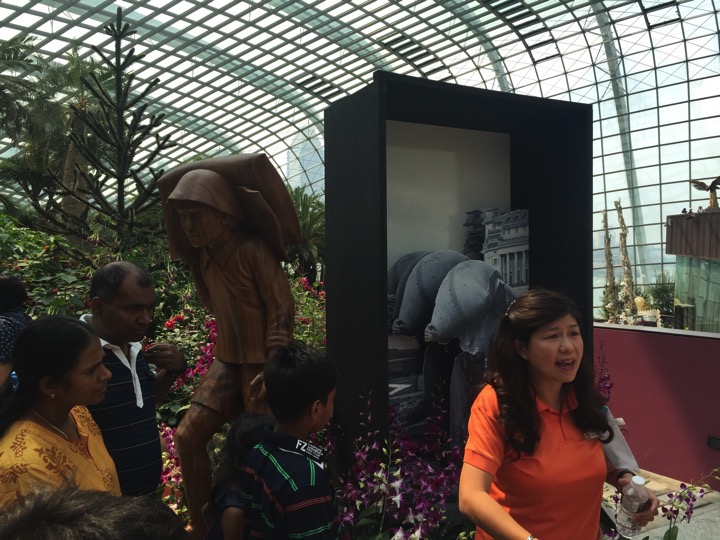 5.  This is the Monkey Puzzle tree.  It is from Chile.

Why it is called that name? 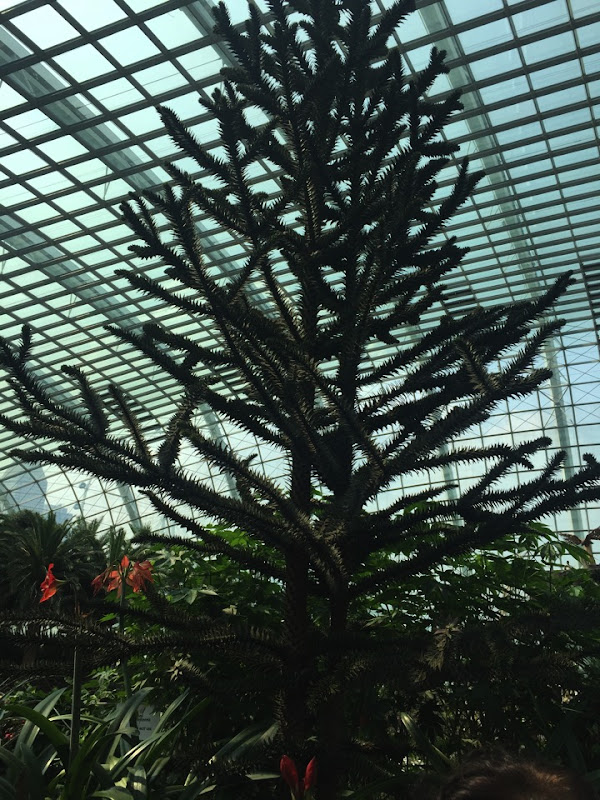 When monkey saw the tree, it is so spiky and even the monkey scratch their head to figure out how to climb the tree. 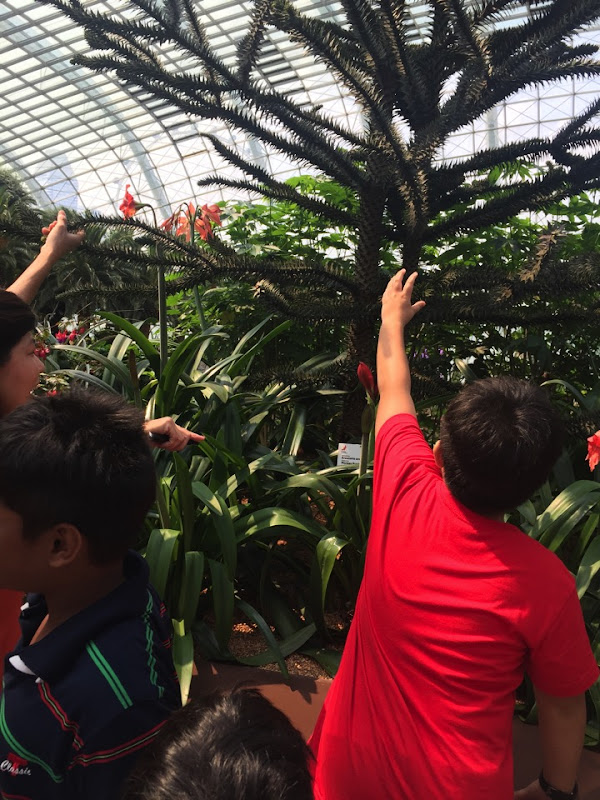 6.  This is the Chilean Wine Palm.  This tree makes good wine.  But it takes 20 years to grow until like this.  And sadly, you have to chop down the entire tree to make a few bottles of good Chilean Wine Palm Wine. 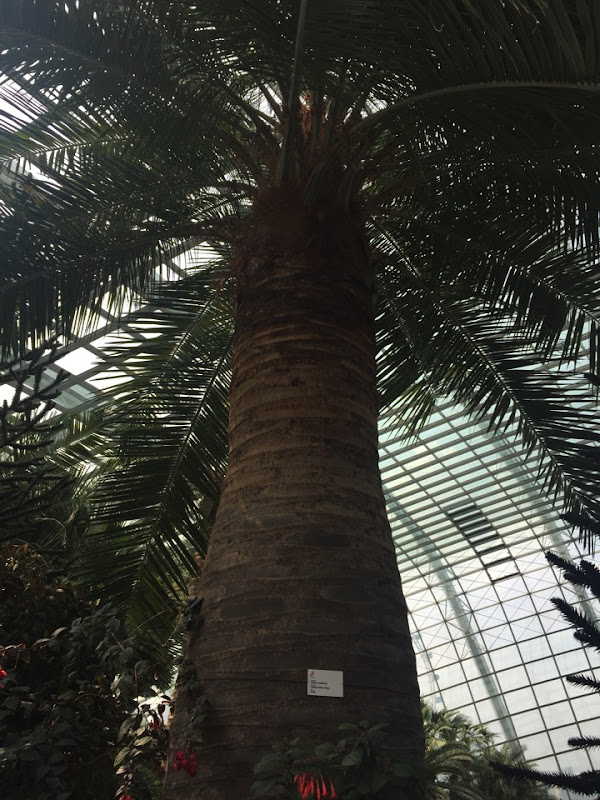 7.  I am very sure we saw Aloe Vera before.  It is always grow on the ground.  But in some countries, they have the Aloe tree.  It actually has branches for them to grow up into the sky. 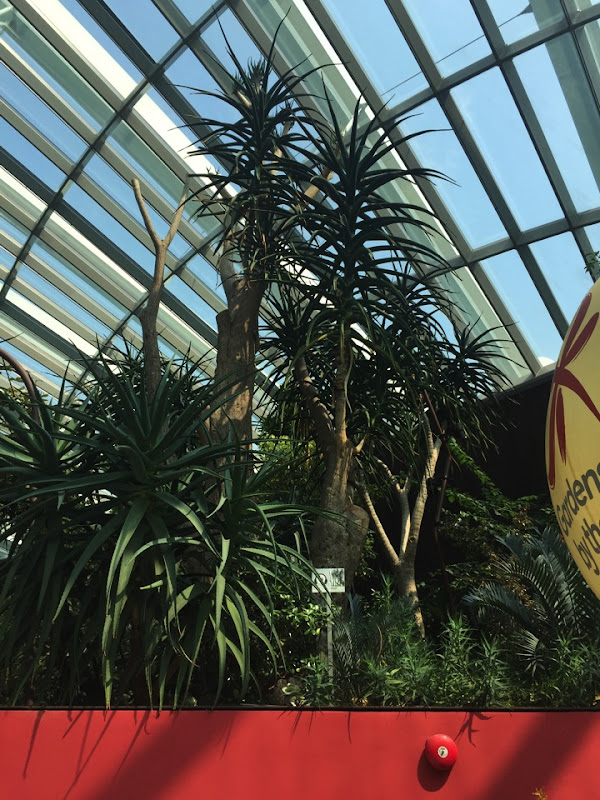 8.  Now, can you see the fruits on this tree that looks like Kiwi fruits.  When Garden by the Bay is opened back in 2012.  Those fruits are there.  Today, you are seeing the SAME FRUITS as in year 2012.  Wah… these fruits can really tahan. 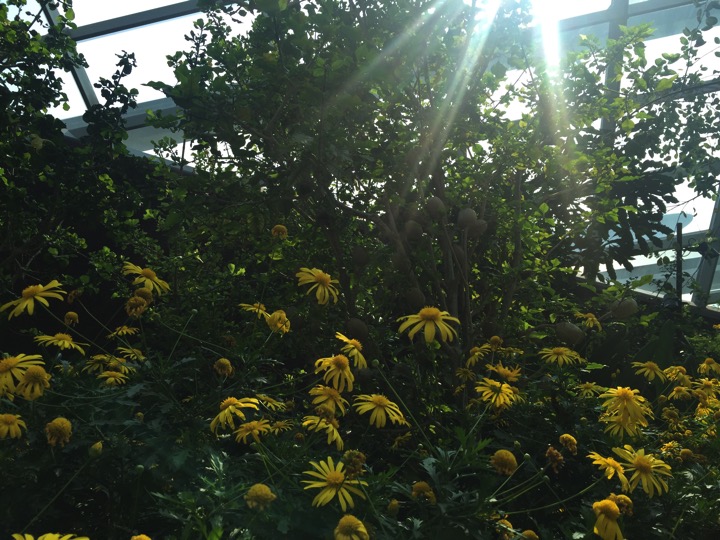 Those kiwi-look-alike fruits are so old. 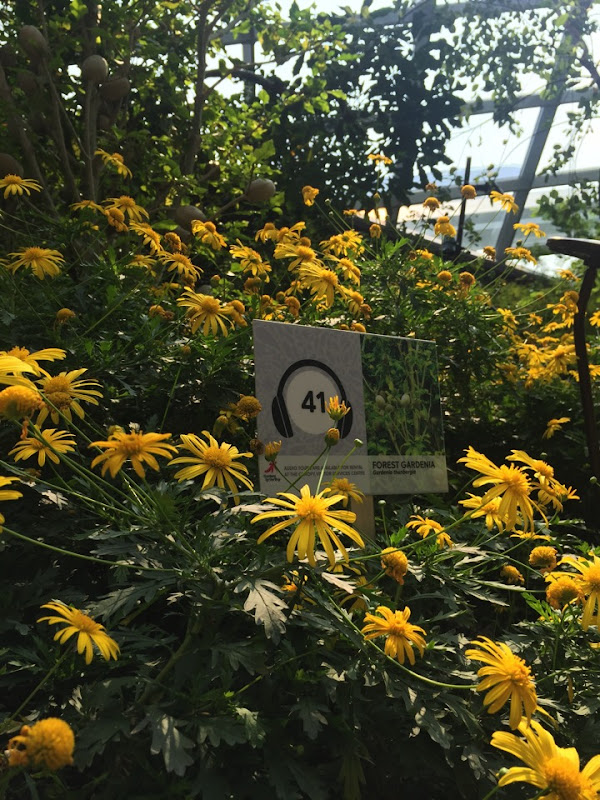 9.  This is the OLDEST tree in Flower Dome.  Guess how old is the tree. 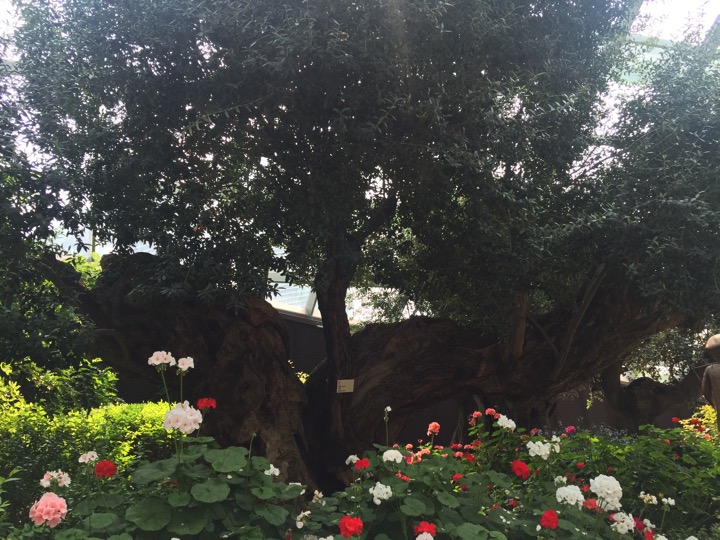 It is an old olive tree from Spain. 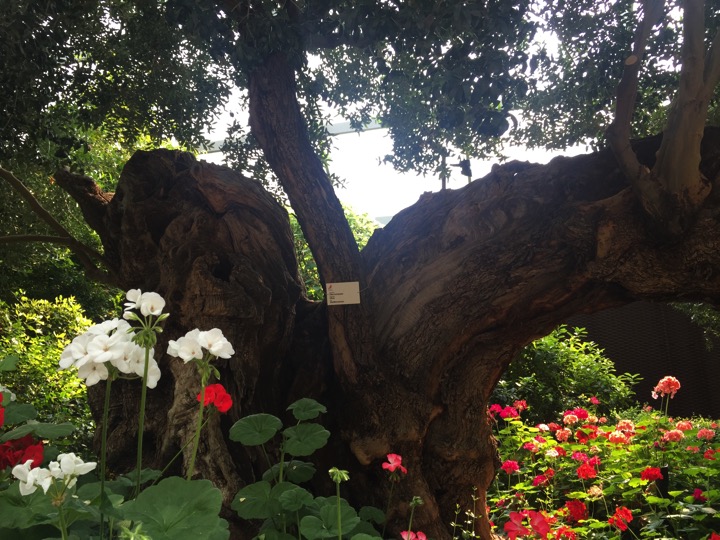 Another old tree.  They don’t know the age of the tree.  But it is old. 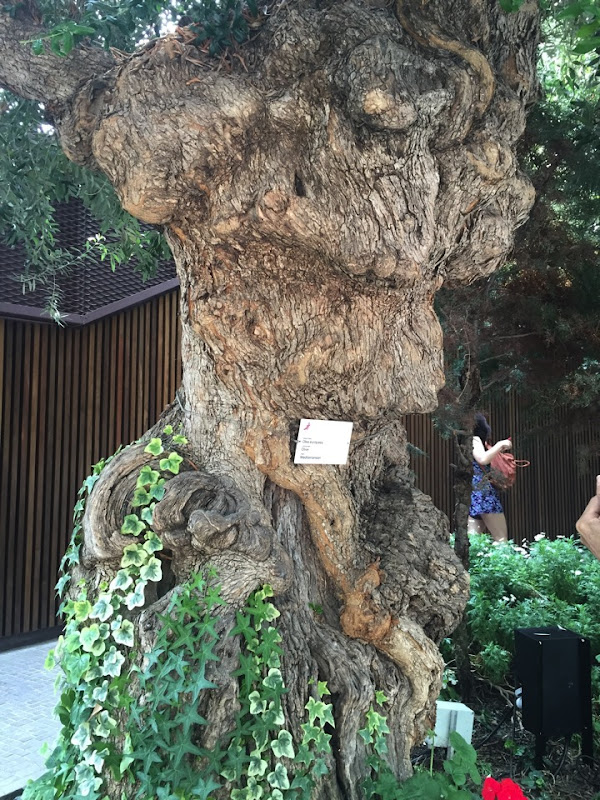 Orchid always has 3 sepals.  And 3 Petals.  Some time one the Petals is called Labellum.  If you look at the flower, it is always symmetrical.  Means, the left and the right looks the same.  Male and Female are grown on the same flower.  Cool.  I really did not know. 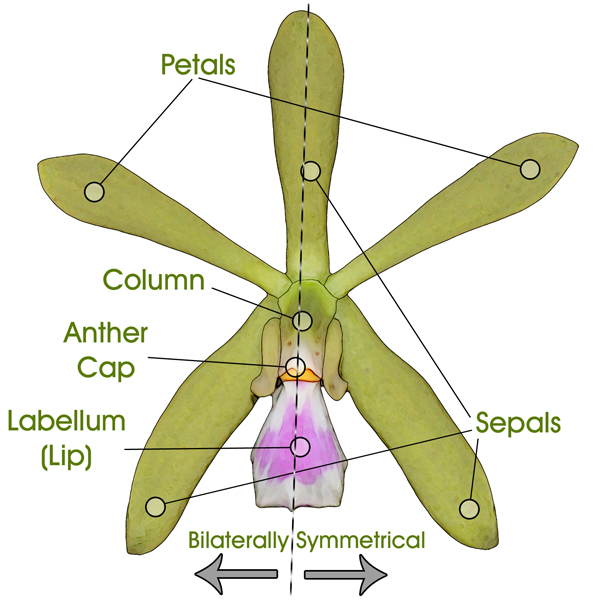 So this is orchid. 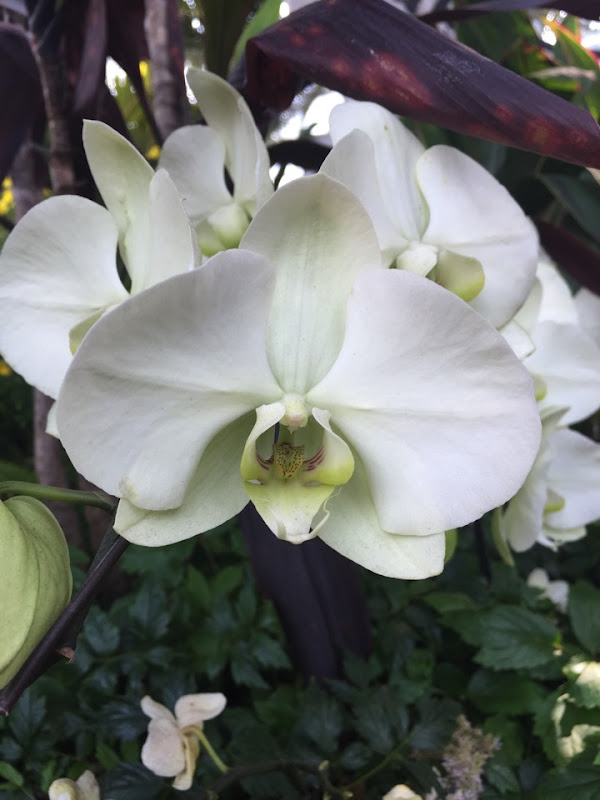 This is also orchid.  And this one has very unique way to do pollination. 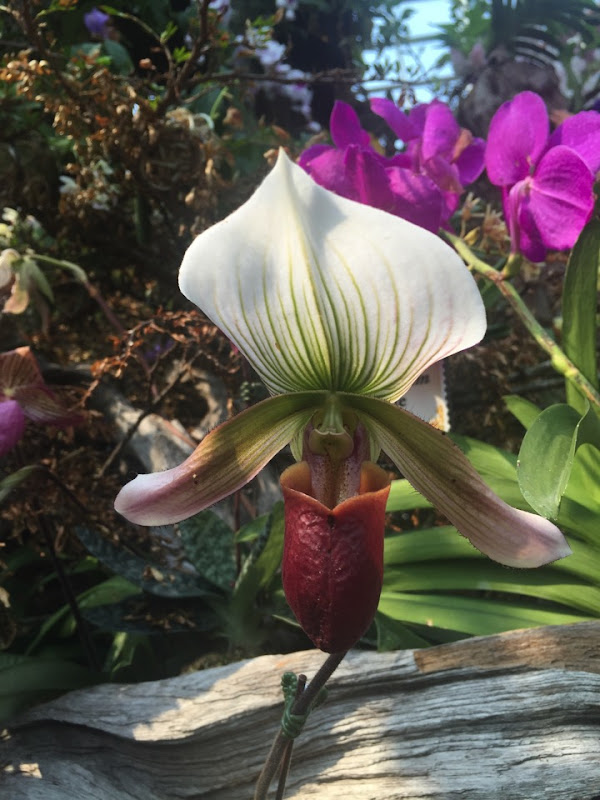 11.  Why is it called Sisters Island?  Two sister died.  And next day, two island appears.  One big one small.  Thus Sisters Island.

Learn all these legendary stories. 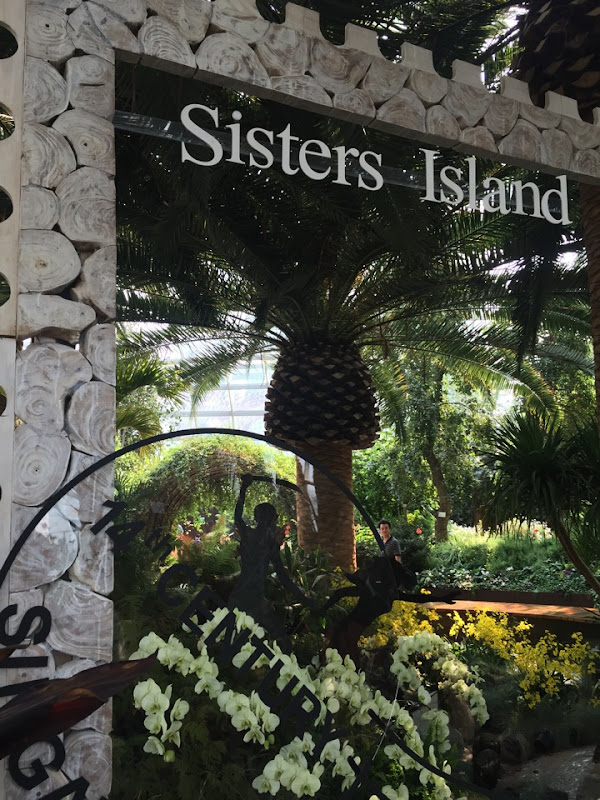 12.  Next is the very sad story about Red Hill. 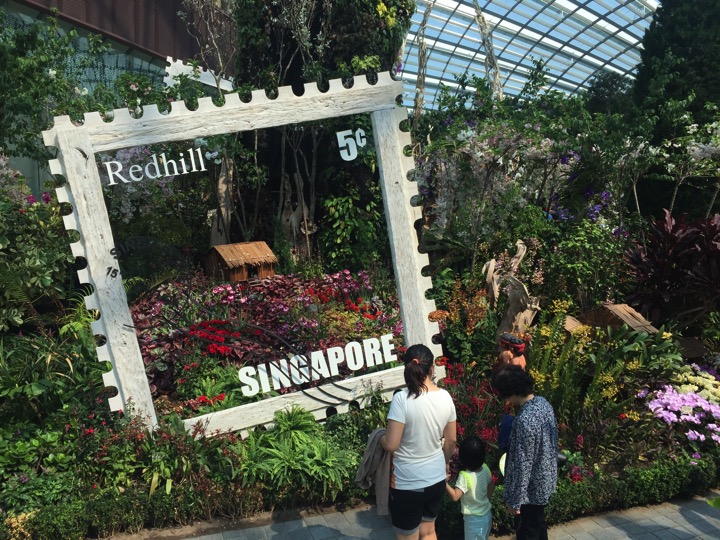 You have to combine the two stories.  This is another story.  The Sword Fish story at Tanjong Pagar. 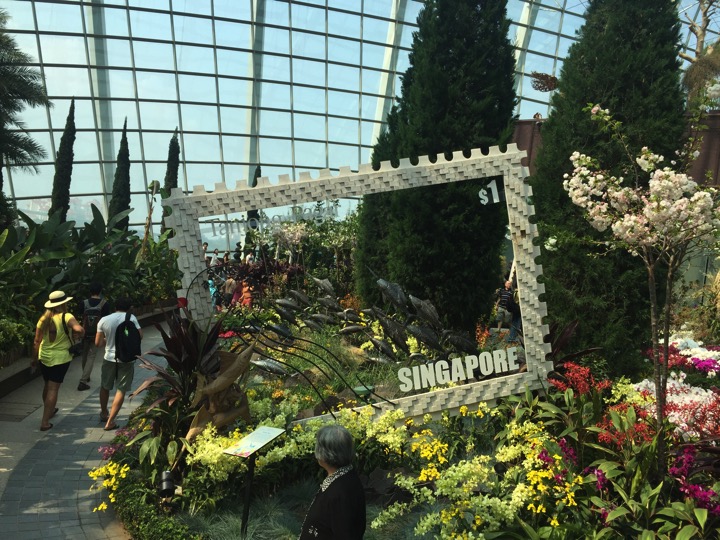 This story is actually in the P3 Chinese Text Book, Chapter 14 I think.

In Tanjong Pagar, there was a lot of sword fish and they kill the residence.

The King was angry but none of his soldiers can do anything.

A boy came and propose an idea, by putting the Banana trees branches and guard the shores.

Sword fish came and poke into the banana branch and got stuck.

Fish is a fish, without water, in the air, they all died.

The boy is a hero.  He stay in a hut on top of where the call Red Hill now.

The King was again worried.  Because the boy is smarter than the king.

So, the King worries the boy will take his throne.

So, the King sent two guards to kill the boy.

And thus that place where the boy stay is called Red Hill.

13.  New exibits coming in to settle down.  This looks like Sakura. 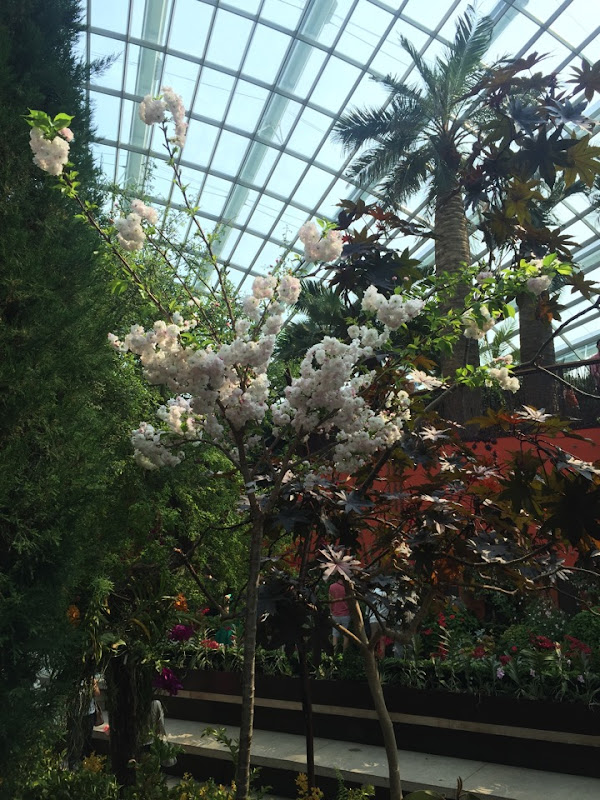 14.  Next story is Badang.  The strong man who become strong when the genie grand him a wish and he chose to be strong. 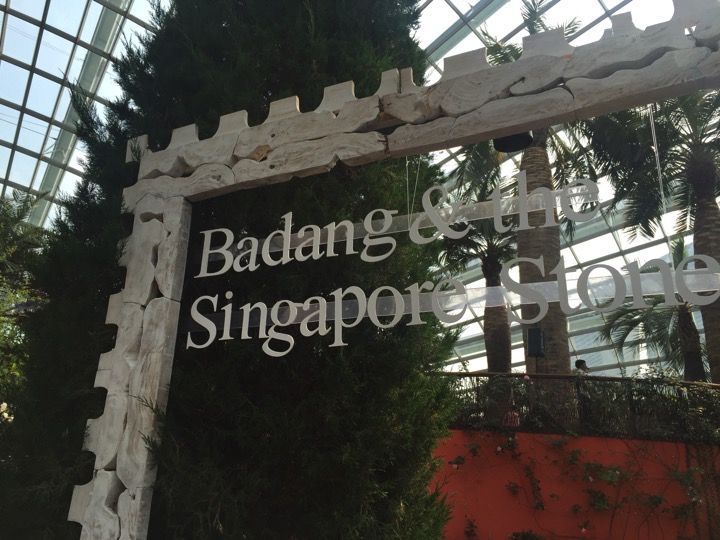 From Fort Canning, Badang, the strong man throw a big stone to where Merlion is today.  Very far he throw.

And thus, this stone is the national treasure, it is called Singapore Stone.

And and… the best part, no one know or understand what is the words crafted on the stones. 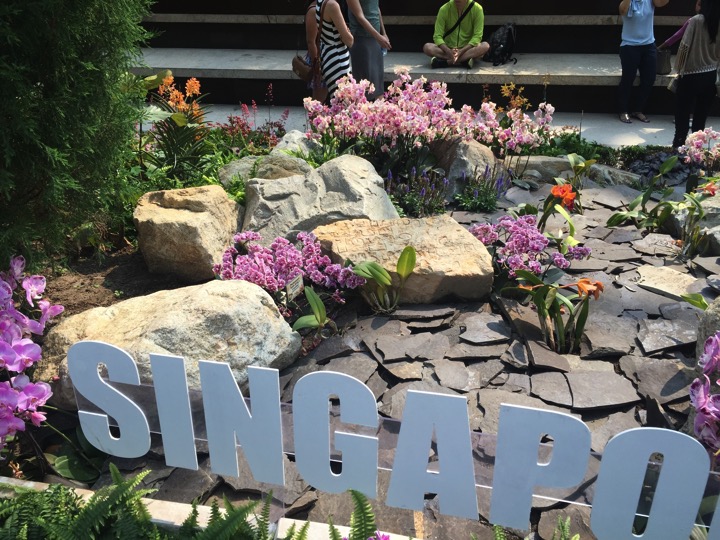 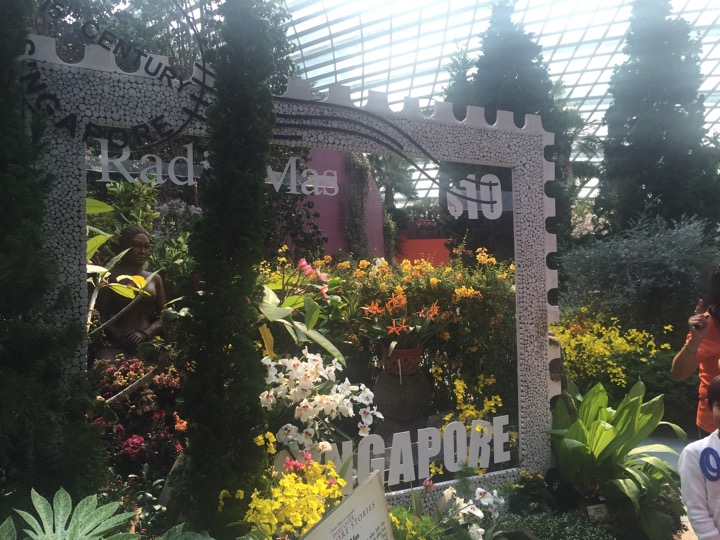 You can find this.  The Tulip Orchid. 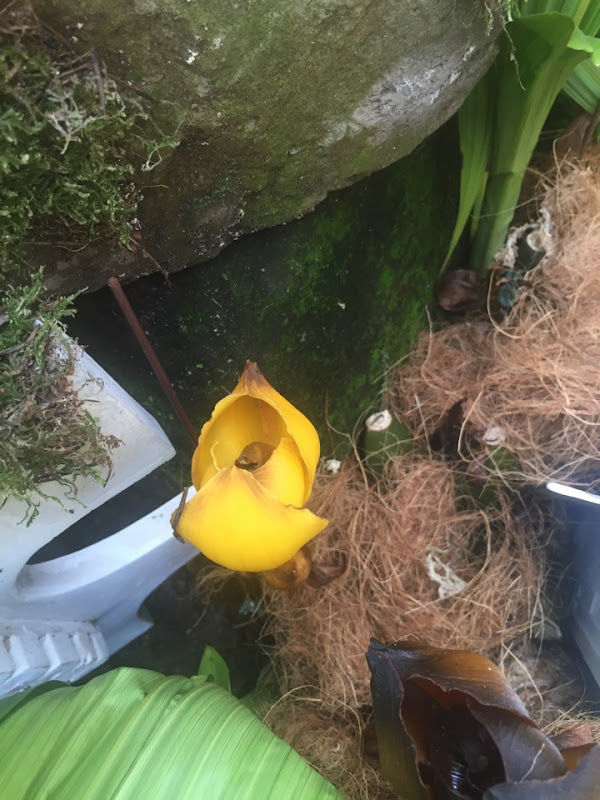 By the way, do you know that Cempedak is a GMO, cross breed between Durian and Jack Fruits?

That ends the tour.

It is very interesting.  The tour guide from the NParks will always have more juicier story than reading the story yourself.  So, next time when you are in Garden by the Bay, don’t forget to look out for such FREE Tour.  Don’t worry, they also welcome Singaporeans. 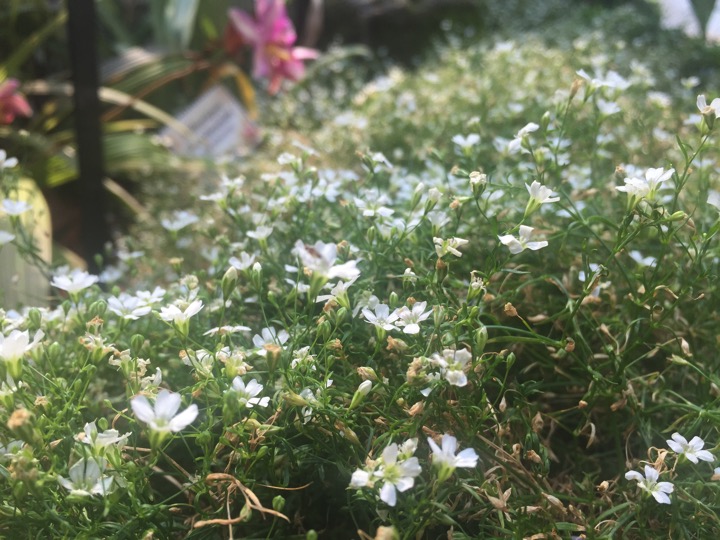