We have make it a habit.

Every Saturday 2pm, while on the way to his Robotics Class, I will let Jay Jay do one passage of Chinese Composition.

It is good as we can discussed what to write, how Jay wanted to tell the story during the short 15-20 minutes ride.

And then, during the ride home, he will use the new method, IOS’s dictation to speak out and write down on the Notepad. 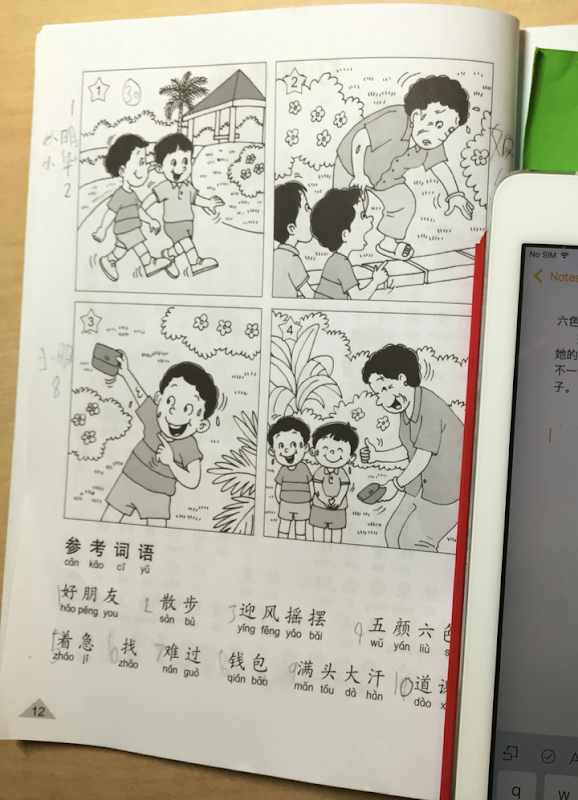 Through out the exercise, I discovered more on the direct translation from English to Chinese problem.

Here are some new tips that I think it is useful.

2.  As this is a “tell story and write story” practise.  I am not so particular on the full stop, comma, and stuffs.  When he write it down, he knows what to do.  But on a dictation mode, usually, you do not want to pay too much attention.  You want to get the “conceptualise” of the story well.  Jay understood that well.

3.  His original sentence is “小明和他的好朋友一起在公园散步”.  I reminded him that we have to always constantly asked ourselves about the 6 W’s.  In this case, where?  So, perhaps he needs to tell people more details about where he was taking a stroll with his friend.  Is it outside the garden?  Is it inside the garden?  or is it below the garden?  or above the garden?  一起在公园里散步 will be more appropriate.  The more I teach him this, the more Jay Jay grasp.  So, even during day to day conversation, I will have to watch out of this and try to remind him to be detail on describing the scene.

4.  There is nothing wrong with "他们一边谈天一边散步“.  But I have to remind him that, he has already talking about both the kids is taking the stroll.  So, by saying this again, make the sentence redundant.  So, I try to make him think, how about tell us What do they feel while they are taking the stroll and chit-chatting at the same time?  Are the boys smiling?  So, wouldn’t it be better to say "他们一边谈天一边散步, 开心极了“.  Learning to write composition is not so easy, it needs patient.  But I believe that if you keep on doing this sort of exercise on weekly, eventually the kid will learn it some days.

5.  In his original sentence, "于是小明就问，你在找什么。老婆婆说我掉了钱包。”  OK.  I have to correct him this.  He has mix up a little bit.  So, I asked him to see what other methods he can use to describe the event instead of saying “我掉了钱包”.  Reason is you are describing a person do something, and the sudden usage of “I” seems awkward.  So, I suggested him to try to describe the “老婆婆” as “她掉了钱包” instead of saying “我掉了钱包”.

6.  I am glad that he started to use “一个凉风习习的早上”，“突然”，”不一会儿“.  All these are suggested last few weeks.  In order to put the story into timing perspective.  You cannot tell a story without a time.  When does it happen?  later?  Now?

7.  As a conclusion, the kid has to be constantly reminded about good manner.  As for now, for good behaviour, he will put down “懂事的孩子”.  Today, I want him to think about why they are “懂事”.  I told him in P4, you probably have to write more other than “懂事”.  How about saying老婆婆称赞他们是会帮助别人的好孩子。The story about how the two kids help the old lady to look for her purse.  This is an action of “helping people”.  Not so related to “懂事”.

This is what he come out of.  Not too bad.  I slowly can see the improvement. 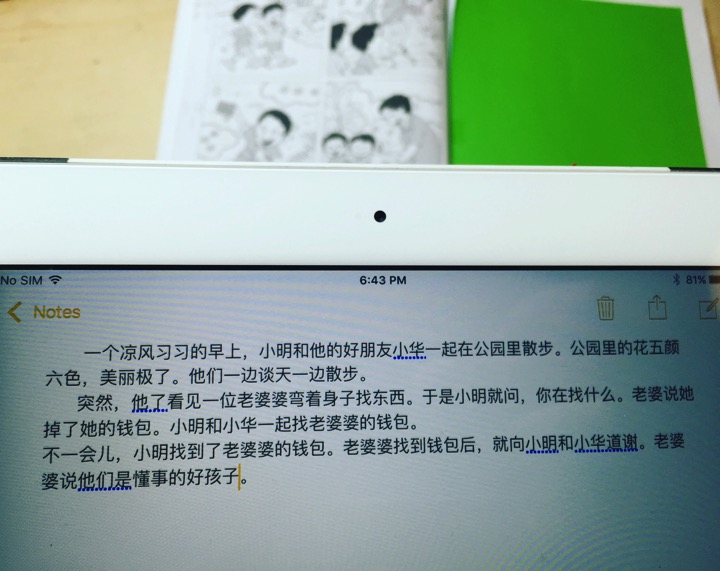 As you can see in the first picture, there are some other words that he choose not to use.

But I think he have to start exposing himself to describing the feeling, describing what the facial expression.

And of course, after this, I will usually let him read what the model answer is from the book.  Those are really good, but I do not expect him to learn those.

I only wanted him to learn the correct way to speak, to describe and to write down.

So far, I am very very excited and happy about his progress.

During the car ride home, he told me that he is very happy about what he has written.  And he thank me.

I feel that he has grown up a lot.

To my friends who has kids.  I speak Chinese at home too.  But somehow the kids has evolve to make English their first language.  We cannot change that.  So, we shall need to put in more efforts to counter that effect.  We sometimes have to put in a lot a lot of efforts into teaching Jay and Kay how to speak Chinese at home, and how to speak correctly.  I shared all these because I found it very useful when teaching both Jay and Kay.  This year, I did not asked Jay do any assessment book.  I only teach him using flash cards, listen and reading out the text book, and using dictation to conceptualise and write down the composition.  And these are the basic root they need the most.  It is the confident they need to find.  So, using these easy methods, I feel that we have successfully make Jay Jay found his confident in this Chinese language.  And the more he learned, the more he wanted to learn.  Good luck!