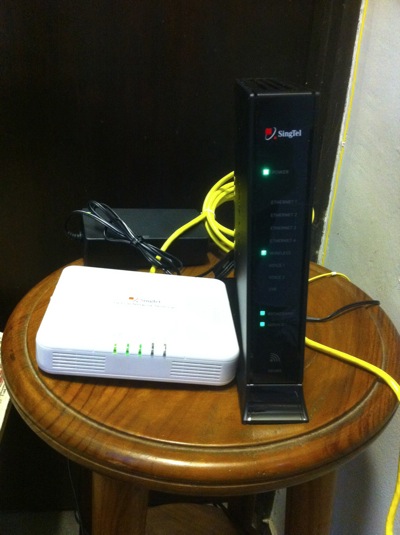 I asked the field tech, you sure that this 2-Wire is reliable, the field tech commented and admitted that the previous one really have tons of problem, but this one so far is "very good"!  OK..  so, I will keep this for a while.

Since I installed the OpenNet TP box at the backdoor so to avoid OpenNet installing ugly cable run in my condo, so I have to use a pair of Aztech Powerline HD (It's Gigabit) there to transit my IP to my main cable structure at home.  The field tech advised me that SingTel does not approve this Powerline / PLC device.  They claimed too much inteference.  So, in future if I need to report any problem on the Fiber installation, they asked me not to mentioned about Powerline.  I noded. 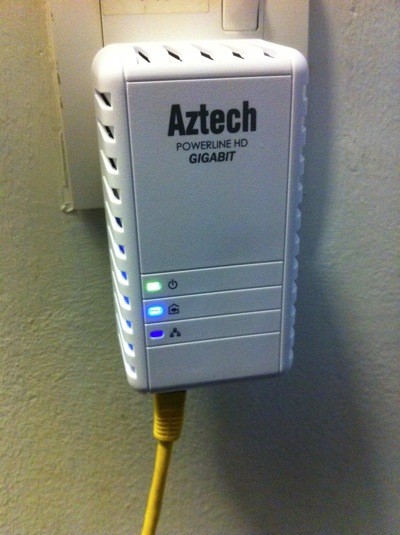 Bear in mind, these Powerline device can come very hot.  So, if you hide it in a cupboard, make sure you have a fan there to circulate the hot air. 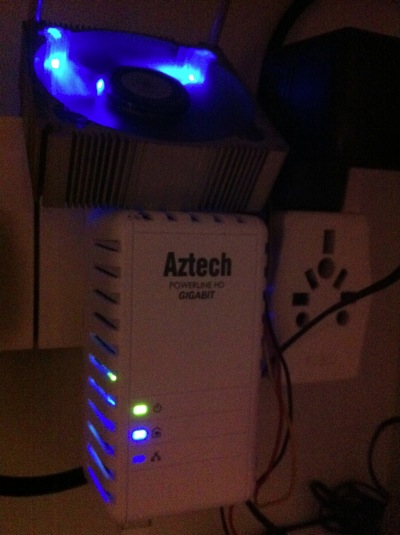 Wow!  It certainly makes my network infra much simpler.  I have removed the ADSL modem, the ADSL router, etc.  So, left with a switch and my NAS. 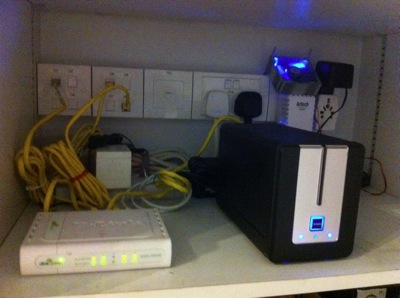 And my home IP infra now is running very fast to the outside world.  My Apple TV, Apple TV2, HD Media Player, Wii, MIO TV needs IP at the TV Console area... And I did not do it using ugly cable running at home... 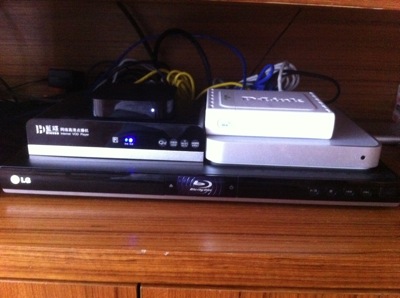 But as expected, the MIO TV still does not work.  Every time you changed to a new channel, it will play for about 20-30 seconds before it comes to a total frozen state.  I was happy for a while, but then later, I took out the MIO TV and throw it into my store room.  While, no hurt feelings, It was there since 16 months ago.  hahahahaha 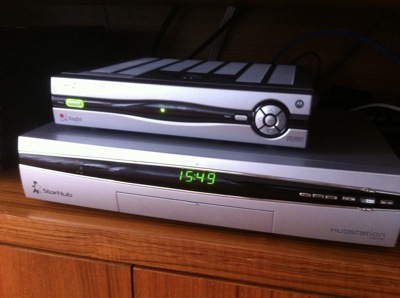 I must said... I am quite impress with the Fiber infra from Singtel.  It is much better than the ADSL2 one.  Now, the local ping to PacNet DNS is about 5ms on average.  It used to be 17ms-20ms to reach PacNet DNS from the 15Mbps ADSL. 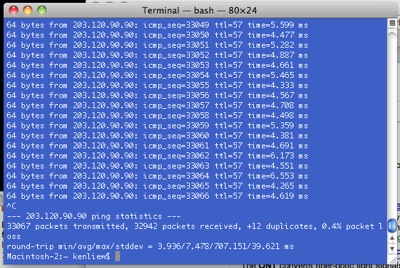 I am paying the same price as the 15Mbps.  But the new Fiber Internet packages will give me 50Mbps now.  What does that mean?

1.  50Mbps local download speed.  And the local upload speed is 25Mbps.  But at least going to PacNet DNS server is 5min on average which is a huge improvement.

2.  The International download speed will be capped at 15Mbps.  And the International upload speed is at 7.5Mbps.  I can live with that.  Just imagin, previously when I had the 15Mbps ADSL, it does not specified, but you can feel that the speed is slow.

3.  With this package, it comes with MIO TV.  But in order for MIO TV to work, you need a "SEPARATE" EtherNet cable from the 2-Wire box.  Hmmm... Does it make any difference if at home, all your switches including the PLC/Powerline are all Gigabits switches?  So, I argue my way, and they tested it, it seems fine for a moment, then, when I get down to watch the show, it frozen every 30 seconds on new channel I selected.  hahaha MIO TV is still a crap!  So, there goes MIO TV, back to the store room.  It is FREE anyway.  I can do whatever I wanted to.

4.  OK.  I think the throttle speed thingy is more severe in this Fiber Internet.  I think Singtel put bigger and newer equipment.  So, your rapidshare, hotfile, filesonic downloads are also being throttled now.  Not to mentioned the bit torrent.  But, I can live with that... as I knew I can always come up with a good solution.

So far, I am happy with it.  And now, I need to monitor closely and see how it goes.