GE 2011 - Oppositions assured that the votes are secret!

In the past few days, opposition parties has gone thru very lengthy explanation to assure that your votes are indeed secret.  Unless you have a big mouth to tell every one who you vote for, no body will ever know who you vote for if you do not tell.

Today, I get to spoken to some friends and we have discussions about how secrecy is the voting ballot.  Let's look at the voting process in reversed order.  (may miss out some steps, but the general ideas are there).

Step 6.  6 months after the voting, they will go to the supreme court vault to take out all the ballot box which is sealed.  Both the PAP and oppositions party representatives will closely examine the box to see if any one has tampered it?  If not, without opening the ballot box, it will got sent to burnt it all.  ==> no chance to check the serial number and see what you guys voting.

Step 5.  After the counting is done.  All the voting slips are placed together and transferred to a big container box.  And it will get sealed, and every one, PAP and oppositions will sign on it.  And then, it will get transferred to supreme court vault.  And keep there for 6 months.  Why keep for 6 months, just in case there are dispute and need to re-count again the ballot.  ==> The question is, during the 6 month, is it possible that some one or some people actually open the seal, and have a chance to find out who you guys vote for?  It is possible, but if PAP does that, then, it is no good for their reputations.  As after 6 months, the same group of people will need to go and check the seal, and signature.

Step 4.  The ballot tickets from each boxes are joined together and manually being sorted out, and then, they group them in 1-hundred a stack.  So that this is easy for counting later.  So at that time, both PAP and oppositions are there, and I seriously don't think human being has such good memory to know which serial number match to who and who they vote for.  So, up to this point, your vote is still a secret.

Step 3.  So, the voting stop at 8pm.  And then all the ballot boxes will be transferred to a centralized place so that they can start counting the votes.

Step 2.  You walk to the voting station, and it should have lots of privacy for you to fill in your vote and then throw it into the voting ballot box.  ==>  I am sure there are no CCTV to monitor you. 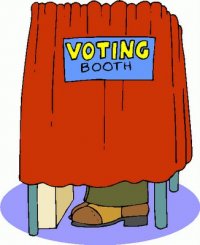 Step 1.  You register, and get a stack of voting tickets.  And then you go to the voting station, and mark the person you want to vote for.  Yes, there are serial number, but the serial number is merely used to make sure how many tickets are issued.  During registration, the election people will know who you are and match to which serial number.  But as long as you do not reveal who you want to vote for, so, you are still fine, and your vote is secret!

They have no way to know who you vote for.  So, it is safe!

Email ThisBlogThis!Share to TwitterShare to FacebookShare to Pinterest
Labels: GE 2011