This is probably the most intensive fight you have seen so far for presidential elections in the past. 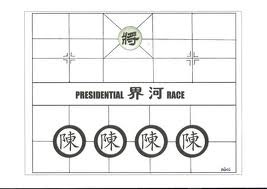 All we know is going to be won by Mr. Tan. 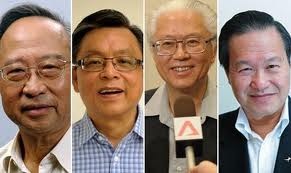 The question is which "Tan"?

Here are some of the info I gathered, I read, I thought, and based on these info, I want to have fun by just make a prediction.  Just like buying 4D.  You tikam correctly or you tikam wrongly.  And then, the when 4D results come out on Aug 27 night, then, see if I win.  No price though... But fun!

- Do you really need to know how to speak Mandarin?  What if you cannot speak good madarin, do you rather admit you are "inferior" rather than "speak some mandarin to win some Chinese votes" anyway?  Hmmm... that seems to be a tough decision.  I think we have to clap our hands for a candidate to have huge courage to do so, and great youtube has been created for this.  Good job --> the one who created the virul youtube.

- When Tan#2 (refering to some pictures above) were in the opposition during the last GE 2011, he and his team did promise to cut their paid if they got selected.  So, in the PE 2011, Tan#2 sang the same song, I don't see any issue.  As he merely standing firm on his stand before and after.  Which is consistent.  But when Tan#4 says it, that is a bit strange, and some Tans thought it is "buying votes".  Some thought is "copy cat".  Is this legal anyway?  Why you need to copy some others people action?  Interesting.

- I like this comic from Singapore Quitters.  Which I re-post it here.  Hmmm... a lot of people don't like what again?  A PAP-puppet or a LKY Puppet?  come on, made up your mind.  Is it not the same?  or is it the same?  Intresting... 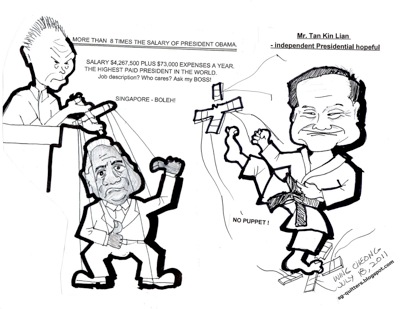 - OK.  Another great one from Singapore Quitters.  If you think about it, one Tan is really a PAP-Tan.  another TAN used to be PAP-Tan.  And yet another TAN is NTUC-TAN which also have ties to PAP.  Or LKY?  So, it is very obvious who is the only TAN that used to be a senior civil servant, but clearly it is a PAP-opposition TAN. 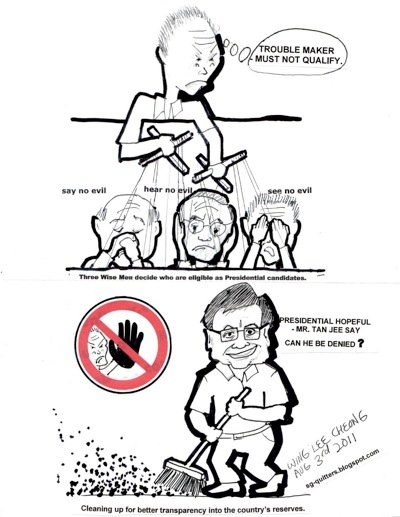 - In my opinion, this is PE 2011. Not GE 2011.  So, it is a ONE-MAN show.  so, can a ONE-MAN oppose the whole government?  Is this the right stage to be in to express the opposition views?  I think one TAN has to really think about what is the job scope of the president.  YES.  Hold the second key for country's reserves.  But it is "Bai-Sui" one mah?  Making some noise, and cannot move, back out I think it is OK.  A President job is to have dinner with lots of politcs figures in the world, and to be present in NDP, and to be present in Charity, etc.

- Don't get me wrong.  During PE 2011, I like oppositions.  Becaue they really have a point.  I also like Nicole Seah.  Because she is really CHIO and cool.  So, no complaints that she come out to endorse the TAN she likes.  She is popular, she has to make a statement, and she has her own rights to choose who to vote for and endorse for.   Just look at her facebook page, has she said anything too much on this PE 2011?  I don't think so, all she said is I am endorsing the TAN I like, hey, he wearing the same cloths again, oh, I will be walking with him here and there to give my support.  Clever girl, she understands that PE 2011 is a different stage, and she clearly knows where she stands.  She also very tone down and not having said "my supporters!  Please vote for this TAN I like", I dont think she wrote a lot on these.  :) 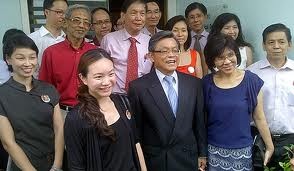 - What we need a a president that can solve the curry issue.  Unite the people.  Be it immigrants or be it different races.  Promote unity is a must. 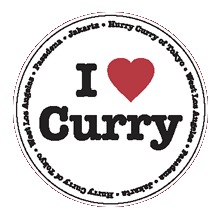 - A TAN is very clever in delivering this message.  Unity and harmony.

- However, Two TAN fighting during Interviews may give bad publiicity. Boys we know the Glasses TAN is always the defence here and there.  He used to be defence minister, right?  Its his job, in his blood.  But the Hopeful LOVE TAN, please try to calm down.  Be agitated won't help.  Remember, we need a president that can unite people, not a president going to split up the Singaporeans.  Your rivals is not stupid, and now they have put all ammunitions here and make a big hoo-ha about it.  So, watch out.  That's a No No.  That TAN english is powderful, he knows what he is saying, only mandarin really sucks only.

- Out of the 4 TANs there is this eye+smile that I don't like, it is classified as the people that I don't trust look.  A president must have a certain look.  With that look, I don't know leh, it's just my feeling.

- GE 2011 has over.  The FEAR has over.  Since this PE 2011 is nothing to do with the government (they said)... So, may be we should say things we really want, and vote the people we really want.  So, this is what I call SWING VOTES.  The Swing votes may be quite predictable after all.  Hey, last time, if I vote XXX, I will lose my HDB upgrades, etc etc that kind of thingy won't apply here.  Also there is no GRC restrictions.  It is a VOTE by your OWN FREEDOM, nobody will care about who you vote (not PAP certainly) thingy.  So, please vote freely, don't waste your votes.

- So, if you hold a second key to the vaults, what can you do again?  Check what balance?  Who has the ultimate power?  Who decided the power?  Who is the boss here?  This is the same questions as you won a GRC, will you be able to be in the cabinet?  yes you have more voice, but is there anything you can do?  Wow, they can even reject a MP to attend a hungry ghost festival dinner.  That's power.  The point is Singaporean has chosen a government not long ago, and it will stay as it is for the next few years.  Some times, the same thing you said in the GE 2011 may not be appropriate to be used in PE 2011.  Can make the point sharp, and thats it, put more efforts in how to make yourself a POPULAR PRESIDENT.  That is the main task.  A popular president unites people but not divides them.  An opposition divides people so to gain support to win elections to take control of government so that you can decide on new policies.  These two things are really different. Of course, this TAN knows this very well.  That is why he stressed that PE 2011 should not be seen as a race between the opposition and the ruling People's Action Party.  Say is one thing, but sometimes, subconciously, you can do another thing that oppose to things you said.  Every little small actions counts.

- I think a lot of people are upset about Patrick.  So, some votes are lost for White Hair Tan.

- Many people (mainly PAP supporters) likes George Yeo.  Although George is the one that come up with the Casino ideas.  But many people don't like the puppet master actually pull out Georgy, and bring in a White hair TAN with glasses.  You know the government also know how to put up a good publicity.  Sorry Andrew, you are out, as I want 4x TAN to be competing.  It is a never happen before event, and we all love it, we all love to see 4x TAN competing.  We dont want a Kuan in it.  Still, back to the point, White hair TAN may lost more votes because puppet master forcefully play his white hair chess piece.

- The agreesive TAN is a bit too aggressive, and the bosses may play the "he is not uniting Singaporeans" card, and too bad, he may lost a lot of votes in this manner.

- The role of president and the power of a president can have is still a mystery.  It is best remain as it is.  Don't over commit or over promise things you might not be able to do.

- As for the OLD TAN, have you seen he playing the Ukelele?  Singing the passionate Singapore Songs?  Wow.  Cool.  He seems harmless, and trying to unite people.

So based on the above info, I predict my 4D results to be....

I think there will be a strong fight between Aggresive one, and the white hair one.  But both will not win, as we really need some one that is harmless, not too PAP related, and able to unite people and promote harmony.  As for the other TAN, really, the publicity not there and there is no significant records about him, no history too.  So, he may lost his deposits.

Having said all these... I am not a Singaporean.  But I am facinated by all these politics in Singapore.  Oh, I cannot vote.  So, my views are solely my opinions, and I just wanted to share it out.  And please remember, voting is secret!